The snarling Bulldogs have won through to this year’s WGFNC senior decider and the chance to claim back-to-back premierships after a comfortable win over Tooradin-Dalmore in the second semi-final earlier today at Bass.

The last time the two sides faced off was only a few weeks ago in Round 17 at the Gulls’ nest, with the Island claiming the points – if only just.

So, all eyes were on the semi-final to see if the Gulls could take their imposing form from their qualifying final win over the Cobras, and covert it to a victory over the ladder-leaders.

Those who couldn’t make it to Bass to watch the game may question just how comfortable a four-goal win could look, but – despite the dry conditions – a typically strong breeze to the flank nearest the away rooms wreaked havoc.

Those who’d played at Bass often before would have become accustomed to the conditions, and it looked like the Island settled first – despite the Gulls winning the toss and kicking with the breeze in the first.

That was in no small part to the pure ruck dominance of Cam Pedersen, the likes of Jason Tomada and Mark Griffin behind the ball, and the champion on-ball trio of skipper Brendan Kimber, Zak Vernon, and Jaymie Youle.

While Nick Lang (two goals) and Andrew Dean goaled in the first term for the Gulls, an outstanding shot on goal from young Billy Taylor hard up against the boundary into the wind showed that the Island wasn’t simply going to shut the game down in the first and third terms – instead counter-punching whenever the opportunity arose.

To limit the damage the way they did was a sight to see, while too often the Gulls found themselves gravitating towards the most windswept part of the ground.

Instead, when it was their turn to stream forward in the second and final terms, the Island better utilised the Hade Avenue side of the ground.

Only two goals were kicked into the breeze all day – both by the Island.

Despite some at-times wayward shots on goal in the tricky conditions caused by the breeze, Beau Vernon’s side had a number of avenues to goal – with seven individual goal-kickers.

The Island seemed in a relatively comfortable position after quarter-time, when Vernon implored his troops to not let the Gulls impact the scoreboard in the second. They ultimately scored one behind for the term.

It seemed hard work all day for the Tooradin-Dalmore defenders, but they stood strong impressively given the circumstances.

Luke McKenna and Andrew Proctor simply refused to give in, while the likes of Jordan Kelly and Waide Symes were also impactful for Lachie Gillespie’s side. In hardly ideal conditions for forwards, Dean’s work rate couldn’t be questioned, while Kris Sabbatucci (two goals) at one stage loomed as a real momentum-changer.

He slotted a long bomb after the three quarter-time siren with seemingly half the Phillip Island side standing near the mark, and as the ball sailed through his side was just one straight kick in arrears.

But the Bulldogs still had the final term with the breeze up their sleeves and a goal to Leigh Warne – at the back of the pack, goal-side with an uncontested snap from close-range – about five minutes in went a long way to icing the game in the chilly breeze.

In the eyes of some, Pedersen’s astonishing season from an individual standpoint may somehow overshadow the impact he has on his team mates.

But in this semi-final his sheer dominance ensured the likes of Kimber, Vernon, Youle, and Hayden Bruce – the Island’s match-winners through the engine room – could be just that.

Importantly for the Island, key forward Jack Taylor made it through his first game since way back in Round 9 after persistent hamstring troubles, while for the Gulls a broken hand suffered by Brad Butler in their win over Cora Lynn may not keep him out for too much longer as he could well return before the finals series is complete. His absence against the Bulldogs was telling.

In no way should the Seagulls be too discouraged by their semi-final result. Gillespie’s side has a lot of room for improvement for next week’s preliminary final against either Kooweerup or Cora Lynn at Denhams Road.

Yet if they’re to not only advance to the grand final against the Bulldogs at Garfield, but topple them, they’ll need to find another couple of levels to reach.

For the Bulldogs – the opportunity to record a brilliant unbeaten 2019 campaign awaits.

Cora Lynn delivered a stark reminder of just how devastating its own brand of footy can be on the big stage when it dismantled local nemesis Koo Wee Rup early in their semi-final at Korumburra’s showgrounds on Sunday afternoon.

There was plenty of conjecture surrounding the state of the playing surface in the lead-up to the clash – particularly given Saturday night’s wet weather – but there were no hiccups for the first semi-final, despite the odd soft patch here and there.

Instead, it was how the Cobras blazed their way across the surface that set tongues wagging at the ground. They got off to a scintillating start and led 7.3 (45) to 1.3 (9) at quarter-time – not only setting the tone for the contest, but doing so in such a way that there’d be no coming back for the Demons.

Koo Wee Rup kicked the first goal of the game, but were completely outplayed from that point on.

Jaxon Briggs (two goals), who dealt with plenty of attention throughout the contest, seemed just a class above most – with his explosiveness in and around stoppages, his work rate, his intensity, and his smart disposal all real standouts.

Rout, too, was a key difference-maker, while the likes of Gardiner benefited greatly from Cora Lynn’s improved quality of forward 50 entries.

There were rightfully plenty of questions raised about Cora Lynn’s ability to bounce back after its disappointing qualifying final loss at the hands of the Seagulls at Koo Wee Rup – when they lowered their colours in a number of key areas.

But the Cobras answered those questions emphatically against the Demons, with many of their strongest contributors bouncing back from uncharacteristically poor games.

They were switched on right from the start of the clash, and while the game was still there to be won, simply refused to let the foot off the throat of the Demons who were left searching for answers.

Langley was particularly lethal early – not only with his ability to hit the scoreboard directly, but also to provide a strong link-up option across half-forward.

Down back, the Cobras – led by the likes of Shaun Sparks – were much more cohesive as a unit, showing the sort of desperation and intensity that drove them to such an impressive start to their 2019 campaign.

This was a clash that had plenty of feeling in it early – predictably so.

Any Tooradin-Dalmore or Phillip Island people there to witness it unfold would have seen a performance much more resembling the Cobras’ best – and right at the business end of the season.

The Demons had a number of players who worked hard throughout the day – including some of their more experienced group such as Nathan Muratore, Joel Gibson, Luke Walker and Mitch Collins, and youngsters Bailey Galante and Matt Voss, but the side was well beaten as a collective, and taught a lesson in accountability, in what was Ben Collins’ last game at the helm.

There looks like being plenty of change at Denhams Road next season, but by the same token there’s much to build on moving forward for whoever takes the reins next.

The Demons have a young, promising core complemented by some strong, consistent veterans and they once again showed that their own, unique brand of pressure footy – when brought to the table – is a proven finals-winning formula.

But the Cobras displayed some of their best footy in the first semi-final – the kind of game that’s capable of taking it up to, and beating either the Seagulls or the Bulldogs in the coming weeks.

Next up for Cora Lynn – a rematch of the qualifying final at the preliminary final stage: Tooradin-Dalmore at Koo Wee Rup.

Look out for one hell of an enthralling crescendo to season 2019. 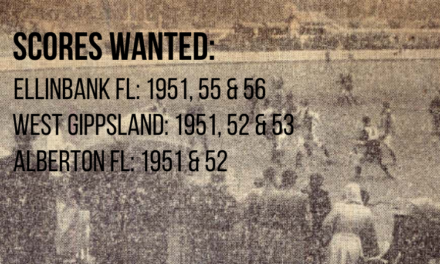