In an Elimination Final of the boys TAC Cup, Gippsland Power take on the Geelong Falcons at IKON Park on Saturday September 8th at 2:30pm.

It will also be live streamed on TAC Cup Radio 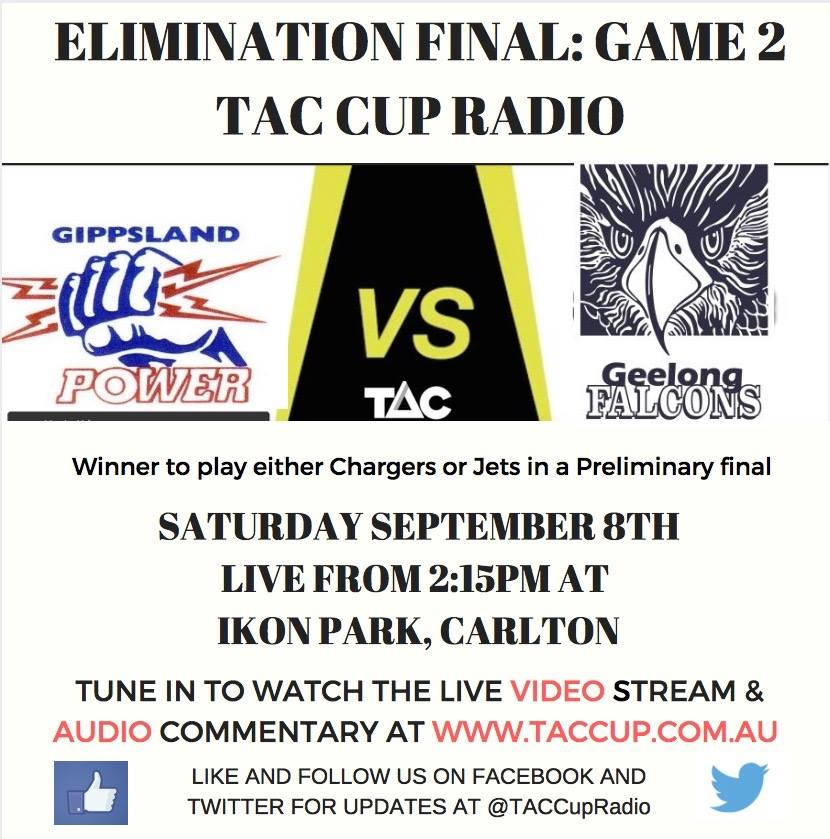 Having finished the home and away season in second position with a 12-2-2 record, the Power will begin its finals campaign for a second TAC Cup premiership when it takes on the Geelong Falcons this Saturday.

The Power has had a great lead-in to finals with two tough challenges in the final three rounds of the home and away season.

The Power boasts a team laden with young stars that play the typical hard-nosed Gippsland way at the contest, but also get out and run when the opportunity presents itself.

At full-back, Reid has showcased his ability to play a lockdown role as a key defender while anchoring the Power’s defence. He has taken on the competition’s best forwards and is rarely beaten – he kept the competitions leading goal-kicker Hudson Garoni goalless in Round 15.

McGannon and Hourigan have also had impressive seasons and their ability to make the right decision at the right time has been key coming out of defence.

The midfield group is rock solid and thrives on the contest.

Captain Xavier Duursma leads the way with a fierce competitiveness and his motor allows him to make more contests around the ground than almost any other player in the competition.

Riley Baldi, Austin Hodge and Boadie Motton lead the team in contested possessions and clearances and are vital cogs in the midfield with their ability to win the hard ball.

Bailey Beck can play a variety of roles, but when he is roaming on a wing, he can change the course of a game with his attacking play.

The forwards are a group of highly talented footballers who all have a bit of x-factor about them. They are dangerous when the ball is in the air, but also when the ball is there to be won on the ground.

Key forward. and basketball-convert, Noah Gown has rocketed into draft consideration after an outrageously dominant last five weeks of football.

He has kicked 19 goals over that span and been among the best in each game – including arguably three best on ground displays. His marking prowess makes his a tantalising prospect and perhaps the key to Gippsland’s premiership hopes.

Sam Flanders (20 goals) and Josh Smith (18 goals) are important to Gippsland’s structure and around goals they put defenders on their heels.

Arguably the most exciting player on Gippsland’s list is Irving Mosquito – a Hawthorn Next Generation Academy prospect. He is quick, smart and capable of the incredible with silky skills and flair to match.

With a chance to win its first TAC Cup premiership since 2005 – a team that boasted Scott Pendlebury, Dale Thomas, Lachie Hansen, Tyson Goldsack and Xavier Ellis – this 2018 Gippsland team may just have what it takes.

Despite finishing second, there are no second chances in the cut-throat nature of the TAC Cup post-season with all games being elimination finals. The Power faces the Geelong Falcons on Saturday at IKON Park from 2:30pm.

In their only meeting of the season, the Power took care of the Falcons in early June as Bailey Beck ran riot. After holding Geelong goalless in the first half, Gippsland claimed a comprehensive win, 10.5 (65) to 3.13 (31). 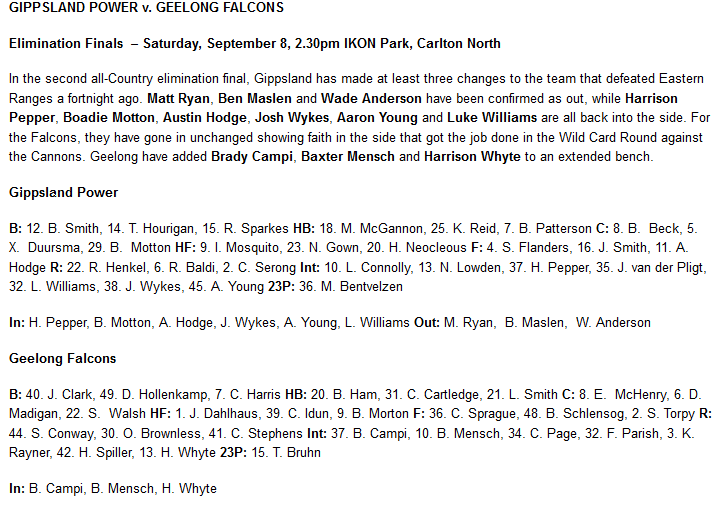