Gippsland Power are through to the preliminary for the first time since 2012, after knocking off the Geelong Falcons by 35 points. The Power had a fight on their hands after kicking the first four goals of the game, and lead by just 16 points at the final break, but powered home in the final term.

The first score of the day came courtesy of a Tye Hourigan error, marking on the goal line but then kicking between the behinds to force a rushed behind. Gippsland captain Xavier Duursma had about five touches in the opening few minutes and his run handed Josh Smith the opening goal of the game. The next clearance inside 50 saw the unbelievable talents of Irving Mosquito get boot to ball with class in the square and Gippsland had two majors on the board.

Geelong were still winning the football but the Gippsland defence was up to the task. Despite a good inside 50, Gippsland rushed it down the other end and big Rylan Henkel kicked a goal off a couple of steps and Gippsland was on fire. Noah Gown‘s aerial prowess was on show with a towering mark, but his decision to play on from the 35m set shot was surprising, however he found Leo Connolly who snapped a goal to make it four on the trot.

Blake Schlensog had clean hands off the deck and kick inside 50 but hit-up a Gippsland opponent. Ben Morton won a crucial one-on-one deep in defence, keeping his feet but did not realise he had time and space to his left, he handballed back in-board to Baxter Mensch who had a shot but it cannoned into the woodwork.

Keidan Rayner was producing some nice moves through midfield, sidestepping his opponents and kicking cleanly inside 50. Connor Idun lead hard from a quick snap on the boundary to mark on the ground. His set shot was perfect off the boot and got Gippsland on the board in the opening term. Mensch took a good mark one-on-one on 50, gave off the handball to Jay Dahlhaus, but the ball was rushed across the line by Hourigan. some great work by Dahlhaus saw him break a few tackles, handball to the free man in Idun and he kicked to Schlensog’s advantage 15m out, delivering the goal. to reduce the margin back to single digits. It did not last long, however with Smith taking a good mark and converting the set shot for his second major.

The second quarter started like the first, with Gippsland getting an early inside 50 and Duursma getting on the end of it with a great set shot goal. Sam Walsh got involved with a quick handpass to Brayden Ham in defence, but the kick was smothered and Bailey Beck pounced. Beck had a nice shot on goal but it bounced to the left and missed. A smothered kick off Riley Baldi‘s boot almost saw Geelong make the Power pay, with Charlie Harris snapping from 15m out, but spraying the attempt.

Charlie Sprague did not make the same mistake, being opportunistic with a fantastic snap to get the Falcons on the board and keep the momentum balanced. Sam Conway was winning some big hitouts through the ruck and Sam Walsh was getting involved everywhere. He won the football at the stoppage and cleared to a wing, then marked at half-forward. His shot on goal dropped short, but was marked in a big pack by Idun, who booted his second goal of the game.

One could sense the tide was turning, with Geelong getting more of the football forward of centre. Sprague had another chance from a good mark, but he went too close to the man on the mark and his set shot went out on the full. Just as it appeared to be that way, Oscar Brownless had a late tackle on Matthew McGannon for a downfield free. Harvey Neocleous made no mistake and kicked the goal. The Power pressure was mounting and it lead to a mistake on the goal line with Cooper Cartledge trying to rush the ball through but was tackled by Harrison Pepper. Lucky for the Geelong defence, Pepper missed the snap. It was not long before Connolly pounced on his second bending it around the body to sail one home from 40m out.

Cartledge’s work in defence was good one-on-one against Gown, beating him on multiple occasions, but unfortunately his kicking was off target with a number of clangers. Duursma had a chance from a set shot early in the piece, but got too close to the mark and tugged it to the left for a behind. Tempers flared a touch when a non-malicious but late all the same, push by Henkel on Keidan Rayner saw the Power ruck go into the umpire’s book. Ham had been quiet in the first half, but made it count with his set shot from outside 50, with a perfectly weighted kick to cut the deficit to 15 points early in the third. Caleb Serong was another who was not up to his usual high production standards in the first half, but had a chance in the third quarter with a snap that just missed.

Schlensog took a big mark at half-forward and had no hesitation in lining up for the set shot, but it drifted to the left and was punched across the line. The big man took another big grab moments later, and then a long bomb into the goal square off the next possession saw Walsh pounce and turn one way and then the other to get boot to ball. The goal umpire extraordinarily signalled it had been touched before changing his mind and calling it a goal after Walsh celebrated with teammates. Kyle Reid signalled he had indeed touched it, but with no goal review, the major stood and the Falcons were up to their ears in the contest. Everything was building towards a huge finish to the game with Gippsland still in front, but Geelong charging home. A great tackle from Sprague on the siren exemplified how much the Falcons had lifted in the term.

The momentum quickly shifted early in the final term with a great one-on-one mark and goal to Serong from the goal square. A few minutes later a Mosquito tackle at half-forward was rewarded and almost resulted in a goal to Beck, but the shot just missed. Nick Lowden also missed a chance running into goal, but Gippsland had the momentum. Lachlan Smith did well to lock up Mosquito inside 50 and clear the ball from danger. The Power fans could sense a preliminary final spot was almost there, and when Pepper ran into goal and nailed it, the crowd went up. A great chase by Duursma on Walsh resulted in a less than effective kick, with the Gippsland leader showing the way. If the nail was not already in the coffin, it certainly was when Beck kicked a running goal midway through the quarter.

Henkel received a free kick and converted the set shot, letting the Falcons defenders know about the score. Gippsland was home and hosed and through to a preliminary final. Gippsland was supremely confident, so much so Smith had a crack from the centre square and made the distance, but the accuracy was just to the right. Matthew McGannon‘s work off half-back throughout the game was consistent throughout, as was Boadie Motton in the midfield. Mosquito missed his chance for a second not long after, just spraying a flying shot on the goal. Sprague had a crack in the dying minutes but also missed. A 50m penalty to Ham saw the exciting forward finish the game with two and be among the best once again. While he did not have the points on Cartledge for the day, Gown kicked a late on for the Power.

The highly-rated bottom age prospect did his best to have an impact up forward and through the middle of the ground. He showed off his class and composure in the first term with a few effective kicks moving forward. He demonstrated clean hands in tight and also showed off his aerial prowess with an attempted “speckie” in the third term. Serong set the tone early for the Power in the fourth quarter with a goal in the first minute.

Flanders is another promising bottom-age prospect who spent plenty of time around the ball and inside the forward 50. He did not have a huge impact on the contest but his defensive pressure was noticeable, laying six tackles.

The possible first round selection was instrumental throughout the four quarters, showing off his aerial ability, ball-winning potential and clean hands at ground level. Duursma was able to drift forward on multiple occasions, finding plenty of space inside the forward 50. What was most impressive was when he attempted to chase down Sam Walsh in the middle of the ground, even though he was going to struggle to make up the required distance to impact the kick. Duursma finished with 25 disposals, 11 marks, six tackles and one goal.

Irving started the match like a house on fire, with the electric forward booting an impressive goal right on the line. His second quarter was quiet but he responded in the second half by finding more of the ball and applying plenty of defensive pressure. His tackling efforts were first-class and he was rewarded two free-kicks for his efforts. Mosquito had the chance to kick his second goal of the day in the final term but missed. He finished with nine disposals, six tackles and one goal.

McGannon was one of Gippsland’s best players on the day. He accumulated plenty of the ball across the half-back line and used it superbly, rarely turning the ball over. McGannon won most of his possessions on the outside of the contest, with the smooth-moving defender finding plenty of unoccupied space. He demonstrated composure and poise with ball in hand, which is what he does consistently well.

The 200cm big man was beaten in the hit-out department to opposition ruckman Sam Conway, but he made up for it with his terrific work around the ground. He continuously applied defensive pressure around the contest and he was able to win some important clearances for his team. Henkel moved forward on a few occasions and was able to hit the scoreboard, booting two important and very impressive goals. His aggressive approach around the ball also caught the eye. He finished with 11 disposals, 11 hit-outs and two goals, in fine all-around performance.

Gown was involved from the get-go, with the forward taking several strong contested marks. He should have kicked his first goal of the day in the first term but he was unselfish and passed it off to teammate Leo Connolly, who converted successfully. Gown continued to display his aerial ability, taking more marks as the game went on, finishing with a total of eight. He was well held by Cooper Cartledge on the scoresheet, but he was extremely dominant around the half-forward flank where he won the majority of his possessions. His hard work was rewarded in the final term when he booted his first goal of the day, contributing to Gippsland’s dominant last quarter.

Reid was able to rebound effectively out of the back half, with the classy defender finding plenty of space. He had his hands full early, matching up on Geelong Falcon Connor Idun, who booted two goals in the first half. Reid’s ball use and composure with ball in hand are two of his biggest strengths and he always made the right decisions when rebounding out of the defensive 50. He moved up forward in the second half but didn’t have the same impact on the match as he did down back. Deep into the final quarter, Reid was struggling to run at full pace, signifying that he was sore or injured. 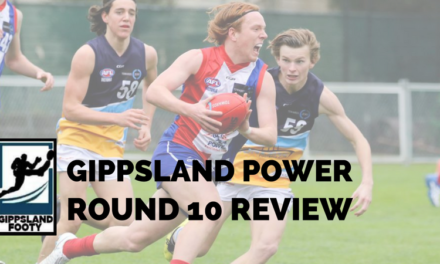