THE Demons had a big day on Saturday with their premiership back to celebrating the 1988 triple premiership year with more than 80 attending a luncheon catered by local Master Chef Brent Sinclair.
With a big gap in the two teams on the ladder and Fish Creek welcoming Tom Cameron and Andrew Seccull into their side for the first time in 2018, most were expecting a fairly one sided match. The way it looked early, it was certainly going to be that with Fish Creek coming out of the blocks quickly in the opening term. Brent Cooper kicked the opening goal of the day for Fish Creek only two and a half minutes into the game; that was the first of five for the day.
The Kangaroos controlled much of the opening term and they had the Demons Wright and Corry working very hard in their defensive end of the ground. A shower of rain made the conditions slippery through the early part of the match but the weather cleared for the large crowd to enjoy. At the end of term one, the Kangaroos were again inaccurate with 5.5 to the Demons one behind.
The second quarter was similar to the first and Fish Creek continued on its way, building a bigger lead. MDU managed a couple of goals to get themselves on the board but it was really a one sided first half with Cooper, Smith and Shaw all very prominent in getting their side to a handy 55 point lead.
After half time it was quite a different match with MDU playing with a lot more vigor and Fish Creek taking its foot off the accelerator. Four goals apiece through the third quarter in what was now a much more competitive game had the crowd now very vocal with plenty of banter going around. Both Seccull and Cameron were contributing well in their first game of the season and for MDU youngster Ben Martin in his first senior game was competing well and didn’t look out of place. At the final change it was Fish Creek up by 58 points.
The last quarter underway and the MDU boys were battling very hard regardless of the scoreboard and for the 10 minutes of the quarter, they were having the better of the contest, first to the ball and hitting targets downfield saw them close the gap slightly with a couple of goals. The Kangaroos however are on top of the ladder for a reason and they sparked back into action to finish the game with the final three goals to push the margin out beyond 10 goals to 67 points at the final siren.
The Great Southern Star

Chaos reigned supreme at Stony Creek on Saturday in an incident reminiscent of the ‘Plugger Pig” moment at the SCG back in 1993.
This time it was a cheeky young kelpie dog that had the crowds in fits of laughter when it invaded the turf for five minutes and avoided all attempts to coax it off until Stony full back Andrew Logan tackled the mutt and held it high above his head while he took it from the ground. Earlier, one of the Stony trainers tried to use the match ball, with the permission of the umpires, to get the dog to come, but it wouldn’t. Others chased but to no avail. But as entertaining as the incident was, club officials believe it might have cost Stony Creek, and their two-pronged attack of Kael Bergles and Jacob Byrnes, the chance to go on a goal kicking spree as they took full charge of the match in the opening minutes of the last quarter. Up until that point, Stony Creek had dominated Toora, who seemed more intent on double-teaming and frustrating Stony‘s star forward Bergles than playing their usual game.
Stony held a 36-point lead at the last change but with three quick goals looked like running away to a big margin before the dog incident. Someone said the dog actually belonged to one of the Stony Creek players but he didn’t own up, and possibly aware the dog was hard to corner, didn’t put his hand up for the task.
But Stony looked the real deal in the match, having added strongly to their line-up after the DWWWW’s demise. All of those boys played well on the day. The arrival of Bergles in particular has given Jacob Byrnes a new lease of life and the pair are working really well together up forward and will be hard to curtail come finals time. The club also has a wealth of midfield talent to run through the centre as required. Jack Soroczynski, Cam McKenzie, Kael Bergles, Michael Milivojevic, Matija Sigeti and Andrew Logan (not just for catching the dog) were named best but. there were plenty of contributors.
Grant, Willder, Griffin, Manton, O’Sullivan and Dyson all continued on well from the previous week for Toora but Stony was just too good on the day.
South Gippsland Sentinel Times

Foster sailed to third on the ladder, a game shy of top spot, after defeating Tarwin on Saturday.
Play was delayed after a serious injury in the Reserves. Foster player Jacob Simpson broke his back and was transported to hospital. The club was informed Simpson is expected to make a full recovery.
In the Seniors, play started fairly evenly between the Tigers and the Sharks. However, Foster hit its stride in the second quarter. The midfield combined well and managed to get some good goals through.
Conditions were a bit slippery during the start of the game, but it cleared quickly and there was little wind. After the long break, Foster was in full control of the game. All players defended well, not allowing Tarwin many opportunities.
Brad Angwin was Foster's best player, as he was a powerful presence in the forward 50. Nathan Van Dyke offered plenty of support in half back. Torn McGowan was once again a big name in Foster’s side, and he kicked six for the game.
For Tarwin, Stuart Kilsby, Daniel Field, Todd Dobson, Alex Whalebone, Jackson Bloom and Reagan Maddaford were named in the best.
Foster’s defensive play worked to its advantage, and it went home with the points. However, Foster will have to work hard to retain its spot with two massive games coming up.
Next week, Foster will take on top of the ladder Fish Creek; a team that has set the benchmark for the season. Tarwin also has a tough challenge ahead, playing top of the ladder contender Stony Creek.
The Great Southern Star 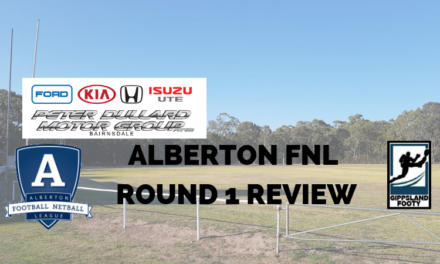