As the storm clouds took hold on Saturday, and the rain and hail pelted down through the arctic chill, the end of the Demons’ season was more hellish nightmare than fairytale.

From the start of 2018, the Island had been building.

Posted by The Local Footy Show on Saturday, September 15, 2018

Anyone and everyone who’d watched Beau Vernon’s side right from Round 1 would say the same thing – watch for these guys in the finals; they’re the real deal.

Though they started the season 3-3 from their first six games – including losses to the Demons at home, and Garfield at Beswick Street – their upside was enormous.

In the opening stages of the campaign, if the side was an engine it would have been a thumping V8 running on four cylinders.

But by the finals, they had as much horsepower propelling them as anyone.

Still, the first word that springs to mind when describing Saturday’s grand final is ‘unbelievable’, because it really was.

Probably summed up Koo Wee Rup Football Club ‘s day. The banner was wrecked before the player could run through it !

Posted by The Local Footy Show on Saturday, September 15, 2018

The dejected look of the Kooweerup players as they left the field following their goalless effort in a shocking 99-point loss, 14.18 (102) to 0.3 (3), was matched only by the sheer look of bewilderment in the eyes of many of the Island players as they headed to their own rooms.

It was as if neither side could fathom what had just taken place.

To say the ball was locked in the Island’s forward half in the first term was one hell of an understatement.

The Demons didn’t even get the ball inside their own forward 50 until the 20-minute mark.

Vernon’s side had a wall of defenders behind the play who continually mopped up the Demons’ hurried kicks out of defence, but yet the Island also somehow seemed to outnumber them at the contest time and time again.

Maybe it was just the relentless, ferocious pressure they applied. Maybe it was largely perceived.

But that’s all that mattered. It set the tone for what was to follow.

On the scoreboard, Kooweerup was only 21 points down at quarter-time… but it seemed like 60 already. The alarm bells were more like air-raid sirens.

They were down in the tackle, pressure act, and inside 50 counts and even conceded three forward 50 marks despite the driving rain.

Collins urged his men to lift the tempo at quarter-time – to wake up mentally, and find a way back into the contest; to try and match the standard of intensity the Bulldogs had set.

But it was to no avail.

The snarling Dogs had already had a taste of blood, and they were going in for the merciless kill.

The following three quarters were a procession – their on-ballers were first to the contest, and their forwards all too often seemed unencumbered.

No backline could hold up under such relentless pressure.

And Kooweerup’s didn’t – despite the best efforts of stalwarts Craig Dyker and Tim Miller.

Aaron Edwards (four goals) was rightfully awarded the AFL Vic Country Medal as the best player on the ground, but there was at least another half a dozen of his team mates who could have made their own claim – players such as skipper Brendan Kimber, Jack Taylor, Zak Vernon, Jaymie Youle, Jarrod Witnish, Jimmy Taylor, Leigh Warne, Joel Piera, and ruckman Nick Higginson.

The Demons entered the clash without arguably their best player in Dom Paynter (knee injury) and one of their most important in ruckman Rory Connelly (foot), which clearly didn’t help their cause. But it also couldn’t explain what happened from the first bounce to the last. No one who was there really could. 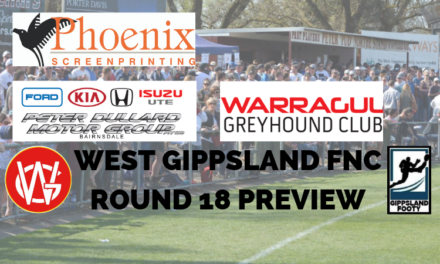