Kilcunda Bass had a tough game against Bunyip on Saturday and ultimately went down to the Bulldogs by 47 points — 13.17-95 to 7.6-48. The Bulldogs began the game with one goal three kicked in the opening term. However Kilcunda Bass had the upper hand at that point with two goals and two behinds.

The Panthers stayed in control in the second quarter too, adding tow goals two to their tally and finishing the hlf 14 points in front of the home side. But the momentum completely changed in the third term.

The Bulldogs exploded, kicking 37 points to flip the game on its head. Kilcunda Bass kicked seven points in that quarter. The final term saw the home side boot another seven majors to bring their final score to 13.17-95 – almost double the visitors’ final score of 7.6-48. Christopher Keif was best on ground for Bunyip. Hayden Spierings was Kilcunda Bass’ best man.

The Phillip Island Bulldogs obliterated the Warragul Industrials at the weekend, holding the visitors goalless until the last term to secure a 167-point win in the ‘Orange Round’ match – a Gippsland born initiative to raise awareness about the issue of violence against women and girls.

Although the ball initially favoured the Church Street end for the Dusties, it wasn’t long until a kick from Zak Vernon to Jordan Patullo saw the Bulldogs put the first major on the scoreboard, two minutes into match. The Bulldogs kept up the pressure and in no time at all, Patullo had scored another as play remained in the Island’s half.

The ball momentarily made its way down to the Dusties’ forward line, but the Islanders quickly regained control with a mark to Jaymie Youle – eventually leading to a grab by Zak Vernon to slot the third goal for the home side 10 minutes in.

It was goal after goal for the Bulldogs as Youle then snagged his first for the match.

Trailing by 24 points, the Dusties tried to fight back and eventually soccered it through the posts at the halfway mark for a point. In response, a kick from Cam Pedersen made it through the big sticks but it had been touched off the boot.

The Dusties regained possession and took their time playing kick-to-kick as they tried to find options, but the Islanders had all their bases covered.

The ball quickly returned to Pedersen so he could slot his first goal of the match.

Then with 90 seconds left on the clock, Pedersen returned for another major, as the Bulldogs went into the break with a six-goal lead. The goalless Dusties were clearly frustrated and utilised their break to renew their game plan, as the change of ends caused havoc for Phillip Island, who registered three behinds in the opening minutes from wide angles. But once they found their feet, the Bulldogs charged ahead as Vernon booted two goals within 90 seconds.

His efforts were followed up by three goals in a row to Brendan Kimber in quick succession. The Islanders’ 11-goal lead must have given the visitors a much-needed nudge, as they fired up and went for goal.

But a wonky kick saw it go out of bounds. They quickly regained possession and tried again, but only managed a behind. The Bulldogs went into the main break with a 74-point lead, continuing their dominant streak into the third term as they kept the visitors scoreless while they put an incredible nine goals on the scoreboard.

The ball was shared around plenty amongst the Islanders to further increase their lead to 134 points at the last change. The Dusties made a small resurgence in the final term to slot their first goal off the boot of Shane Brewster, swiftly followed up by Travis Maher.

They took several shots at goal in the last term, but there was no coming back. The home side were showing no signs of slowing down as they continued going for goal to pile on another eight majors.

Pride was on the line when Dalyston and Korumburra-Bena faced off at Dalyston on Saturday with neither team in finals contention.

What played out was an entertaining, competitive affair but with both teams having the same problem, being unable to take good opportunities in front of goal after good work downfield.

In the end, they had ten goals between them, Dalyston kicking seven thanks to a late flurry of three in the last term.

It was very much game-on at the start of the last quarter with only eight points separating the sides and the match being played at a frenetic pace as both sides sought to get some scoring momentum.

Rob Davey of Dalyston missed a shot on the run and both Clay Tait and Jackson Brooker had chances in the first few minutes of the quarter before Manny Jakwot closed the difference to just four points after some good work by Tyler Newton and Jamie Cann.

With Brad Fisher off the ground with a hamstring injury, Jakwot was on the ball and an extra attacking player allowed the Giants to put themselves in a position to succeed.

But the man rated as Dalyston’s best on the day, Ryan Silver, negated the impact of an extra player up front, by rebounding the ball out of the Giants’ scoring zone three times.

Dalyston banged on three goals from the 11 minute mark to the 16th minute mark, led by Blake Carew, and the home side went on to achieve a hard-fought victory.

In under three seasons, Inverloch Kongwak and Cora Lynn have struck up a very genuine rivalry - the first north versus south rivalry born out of the new West Gippsland era.

But Saturday felt much more like a final than a regular home and away game.

A loss would have spelled disaster for Tom McQualter's Sea Eagles in the context of their finals push, while a win for Cora Lynn would have given even more of a boost to a side that looks every bit the premiership threat.

And at quarter-time, the home side was staring right down the barrel - facing a 27-point deficit. The chips were down.

Kicking with the aid of the breeze in the first, the Cobras - despite missing co-captain Jackson Dalton, Shaun Sparks, and regular first choice ruckman Billy Thomas - looked far too slick.

Their run and dash forward of the centre, combined with their delivery inside 50, posed all sorts of questions for a Sea Eagles defense well and truly under siege.

Though the visitors also lost the explosive Jeremy Monckton to injury early, they still looked to have the advantage - particularly out wide.

The Briggs brothers, Jaxon and Heath (three goals), were putting on a hell of a show early - particularly in their connection with each other - while Nathan Gardiner booted three of his four majors in the opening stanza.

At the first break with his side down 6.3 (39) to 2.0 (12), McQualter was savage on his side's ball use heading inside 50 - with shallow entry after shallow entry not to any real advantage.

Troublingly for the Sea Eagles, they were also struggling badly to defend in transition and seemed almost powerless to stop the Cobras through the corridor.

But McQualter could still see something building.

He felt his charges settled in the term's latter stages and met the Cobras' aggressiveness. He knew this contest would be won in the middle, and he knew the quality of the players at his disposal.

But McQualter would later go on to acknowledge that his side went into the contest with a line-up that was perhaps too big.

He was quick to make a series of telling lineup changes throughout the clash, including moving the super-versatile Tristan Van Driel into different roles across the ground.

Hard-headed, experienced ball-winner Brendan Iezzi stood up to make his presence felt right from the opening stages of the second - knowing full well what was on the line for the Sea Eagles in such a fiercely contested finals race.

He, along with key forward Sam Gibbins (five goals), Rowan Clark, the supremely skilled and equally as composed Lewis Rankin, and Van Driel all proved match-winners as they turned the deficit around.

A barrage of forward 50 entries from the Sea Eagles, as well as some class finishing, had turned the contest on its head - but it was through the middle of the ground, as McQualter had predicted, that the game was being decided.

As the clouds rolled in at the start of a telling third term, the Cobras couldn't kick away to the scoring end - with four goals slotted for each side throughout the quarter.

Late in the term a thrilling long running goal to Heath Briggs seemed to deliver the visitors some much-needed momentum, and when Travis Woodfield converted in the last the Cobras were a point ahead - 12.6 to 12.5.

For a side overwhelmed with injury for large parts of the season, Saturday's was truly a whole team effort for the Sea Eagles - with McQualter struggling to name standout individual performers.

For the Cobras, Nathan Langley was kept to just the one goal but his work rate was particularly impressive throughout the contest - as was the work in tight of Brady White and Chris Johnson.

Nar Nar Goon claimed victory over Garfield on Saturday. The Stars went down by 29 points, 11.13-79 to 7.8-80. The Goons came out firing, putting five majors three on their side of the scoreboard in the first term. Garfield had managed just one goal and one behind.

That margin stayed roughly the same as the two sides entered the main break. 7.7-49 to 3.1-49 was the scoreline at halftime, with Nar Nar Goon leading. That 30-point margin closed to 20 points by the end of the third term. Garfield kicked another two goals and Nar Nar Goon managed just four behinds.

In the final term, Garfield tried their best to get back in the game, adding two majors and five points to their tally by the end of the match. Nar Nar Goon added four goals two to bring their final tally to 11.13-79. Garfield finished to 7.8-50. Trent Armour was best on ground for Nar Nar Goon. Garfield’s best man was Michael Wallace.

Tooradin-Dalmore turned the tables on neighbouring rival Kooweerup to record an imposing win at home.

The last time the two sides played was back in Round 9, and it was the Demons who emerged victorious by 39 points. But Saturday was the Seagulls’ day. They stormed out of the blocks with seven goals to three in the opening term, and held the Demons at bay despite the visitors’ fast start to the second.

Brad Butler was a real standout for the home side, while Julian Suarez booted five majors and young guns Lewis Hill, Cooper Shipp, and Dylan Sutton also had a real impact.

Demons hard-nut Mitch Cammarano (two goals) was again outstanding for his side. 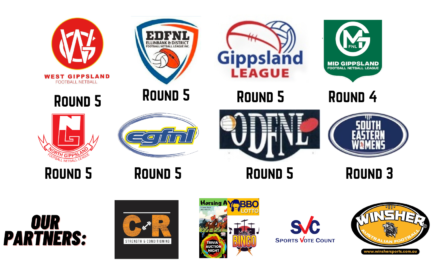