The second all-country clash of the weekend occurs at RAMS Arena in Craigieburn where Murray Bushrangers meet Gippsland Power. The Power are one of the contenders this season and look to be the top country team for season 2019. Coming off a preliminary final, albeit with a disappointing exit in the end, the large proportion of bottom-agers who steered the team to such a successful season are now top-agers and have the extra year of experience. For the Bushrangers, they also have their fair share of talented bottom-agers and should be the country side most likely to give Gippsland a run for its money. For Murray, its dynamic forward line will cause headaches, which in the past has been dominated by talls, but is more likely to be the hybrid-medium-smalls who create some issues for opposition defenders. Jye Chalcraft, Cam Wilson and Elijah Hollands can be damaging at ground level while Will Chandler provides some height up forward, and the match-ups with Jake van der Pligt, Brock Smith, Ryan Sparkes and Tye Hourigan will be the ones to watch. Leo Connolly, Fraser Phillips and Sam Flanders going head-to-head with the likes of Jimmy Boyer, Dylan Clarke and Cam Wild will be another interesting battle, while Josh Smith and Ben Kelly could go head-to-head in the Power forward line. While Gippsland are missing key midfielder Caleb Serong, expect them to get the job done in what could be a thrilling contest to open the season.

Caleb Serong (local club – Warragul): “Caleb is a disciplined, mature kid who’s doing everything he possibly can to be drafted. He has a great footy brain and we’ll probably play him a little bit in the midfield and a little bit in the forward line this year. He’s going to school at Geelong Grammar, so we’ll have him for a handful of games this season.”

Sam Flanders (Moe): “Sam is quite a powerful athlete with great goal sense and a very good leap. We’ll probably play him as a utility that can go through the midfield, up forward and even a little bit down back. He’s a tough match-up given his size – he’s about 183cm – and the fact he can play tall or small.”

Fraser Phillips (Warragul): “Fraser will play across half forward and provide some good link-up between the midfield and forward line this year. He’s very smooth-moving, has a nice left-foot kick and good goal sense and footy smarts. He hurt his knee in Round 15 last season but his rehab and recovery from that has been really good.”

Brock Smith (Moe): “Brock is another one who can play in all three areas of the ground, but he’ll probably play a bit more forward this year than he did last year. He’s a really good size to be so versatile – he’s about 188cm – and he’s very strong for his age. He’s explosive and hard at it.”

Riley Baldi (Moe): “Riley will play as a midfielder and a little bit up forward this year. He had a really good 2018 season as a bottom-ager where he was rated very highly in regards to his clearance work. He has very good midfield craft, good skills both in close and on the outside, and he’s a natural extractor of the footy.”

Leo Connolly (Moe): “The thing that really stands out when you see Leo on the field is his skill on both sides of the body; his kick on one foot is as good as on the other. He has speed to burn and will probably play on a wing or a flank at either end of the ground this year. He’s an exciting prospect.”

Charlie Comben (Sale): “Charlie has missed the majority of the last three seasons due to impact injuries to his jaw and collarbone (twice). He’s physically developed in that time to be a very impressive athlete at a ruck’s height. His pre-season has been super and he looks like being a great addition to our list as a ruck/forward.”

Tye Hourigan (Traralgon): “Tye was the runner-up in our best-and-fairest last year as a defender, but he’s a kid who just ticks the boxes no matter where he plays and what role he’s given. He’s a good size – he’d be 190cm-plus – and can play tall or small, and he’s a very good decision-maker.”

Zach Reid (Leongatha): “Zach is already a genuine AFL ruckman’s height at around 200cm and has some time on his side to grow into his body. He’s all arms and legs at the moment, but he has some great skills for a big man. He’s also a fast learner, he’s really competitive and he’s shown he has some versatility in other positions.”

“Brock Smith (see above) is someone who stands out as a really mature young man. He’s graduated from high school and shows really good leadership qualities. Ryan Sparkes (18yo in 2019, Inverloch-Kongwak) polled highly in our best-and-fairest last year and he’s a tall defender who’s really worked hard on the leadership side of his game. He’s someone who can show our bottom-agers what it takes to play at this level.”

“I think our strength will be the experience our boys got last year; we played a lot of bottom-agers and on average we had 12 in our side each week. A lot of those guys have played together at Gippsland since under-15s, so they know each other fairly well and we’re hoping that cohesiveness will roll into their top-age year.” 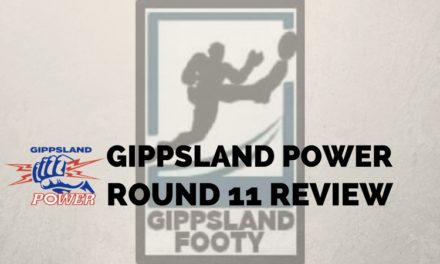