After a tough introduction to Division 1 footy, the Bass Coast Breakers were more prepared this week. With the strong tackling pressure and high work rate, a strong point in round one coach Jason Mitchell urged his team to bring the same level of intensity into this contest.

After three first quarter goals to Mornington, the Breakers settled into the game in the second quarter, keeping the visitors to five goals at half time.

A goal attempt by Ella Angarane late in the second quarter hit the post but it was a sign of things to come with the Breakers doing their fair share of attacking in the third quarter, which unfortunately was not converted. Bonnie Mullins provided a lot of run through the centre, utilising her speed to move the ball forward.

Her tackling pressure along with Sophie Bolding helped to slow down the Mornington transition through the middle. Charlotte Bolding was proving a headache for the visitors taking a number of marks deep in defence and winning a lot of contested ball around the ground.

The last quarter proved to be the Breakers best with Laura Kew breaking the season’s goal drought with a clever soccer off the ground.

Ella Angarane followed up soon after, nailing a long range set shot. Suddenly the momentum had changed and the Breakers were doing all of the attacking. However, the large ground and lack of bench was taking its toll by this point with the midfield tiring after working relentlessly all game and the Breakers weren’t able to take further advantage on the score board. The three first gamers showed a lot of potential with the height and athleticism of Lucy Caldwell, a welcome addition to the Breakers backline.

Warragul were unable to score after half time as they fell to Hastings by 53 points in a night game that followed the senior men’s game that was played during the day.

Hastings’ inaccurate kicking kept the home side in the game all the way up to 3/4 time, but the Blues piled on 6 goals in the final term to put the game beyond reach. 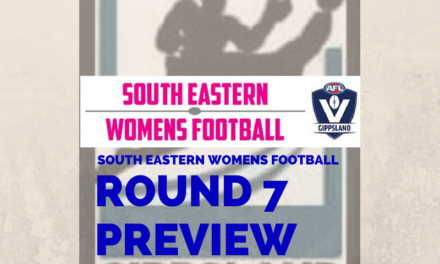