Relatively even scoring in the first term saw the Lyrebirds take a slim lead.

Yarragon kicked one goal two while the Buln Buln managed one goal five, accuracy preventing them from a greater margin. But three points that separated the sides at the end of that first quarter had blown out to 27 points by halftime.

The Lyrebirds booted four goals one, letting the Panthers add just a single behind to their tally to bring their score to just nine points.

After the main break Yarragon attempted to get back in the game and snuck three majors through the Lyrebirds’ defence.

But Buln Buln added another two goals in the third quarter, which kept the Panthers at bay by 24 points as the two sides headed into the final term. The Panthers could do little as Buln Buln charged ahead in the fourth quarter, albeit with some accuracy issues, kicking two majors and seven behinds to bring their final tally to 9.16-70.

The Panthers added just one single behind to the scoreboard and they finished the day with 4.4-28.

Bryce Monahan was best on ground for the home side. He was backed up by the efforts of Trent Baker, Adam Rakip, Sam Langford, Jake Herbel and Hayden Baker.

For the Panthers it was James Harvey who walked away as his side’s best man on the day. Chase Blackwood, Sam Noy, Devin Pollock, Nathan Somerville and Jesse Hayhow also made important contributions.

lick the image to view on the official league website

A strong opening quarter from Catani was not enough to hold off Neerim Neerim South when the two sides met at Catani on Saturday.

The Blues went down 10.4-64 to Neerim Neerim South’s 15.17-107. Catani held the Cats to just four behinds in the first term while they kicked a solid four goals to opening the match. But the tide turned in the in the second and the Cats took the lead, booting four goals five to bring their tally to 33 points – just three points off Catani’s mark. The Blues had kicked two majors in that time and would have their work cut out if they were to hold off the charging Cats.

After the main break the game belonged to Neerim Neerim South. Goal after goal went to the Cats as they kicked eight majors on their way to a 40-point third quarter lead. The Blues had managed to slip one goal three past the Cats defence – not enough to keep the visitors at bay. The two sides went into the final term 45 to 85. The fourth quarter saw Neerim Neerim South maintain the lead and add three majors and four behinds to their tally, finishing the day on 15.17-107. Catani kicked three goals one in an effort to close the gap before the final siren, but in the end lost the match by 43 points, finishing on 10.4-107.

Poowong were held goalless for a full half of footy when they took on top team Ellinbank on Saturday.

It took until the third term for the away side to hit the scoreboard with a major, the Magpies leaving with a 74-23 loss.

The Eagles got off to a flyer through strong contest work from Johnson and Farthing and dominant play from forwards Cowan and Urie, who had six goals between them for the game. While the home side was able to put goals on the board, the Magpies were not, kicking five behinds to the Eagles’ 3.1 in the first term to go behind by 14 points at the first break.

Ellinbank’s defensive pressure went up a notch in the second term, with players rotating well and blocking Poowong’s avenues to goal.

This, combined with the poor conditions, resulted in the away team only being able to post a single behind for the quarter while the Eagles booted two more goals to take a 35-6 lead into the main break.

The trend continued in the third term, Johnson and Farthing dominating the ball for the home side and delivering to Cowan who was causing a headache for the away defence.

Poowong were able to create a few more chances than the second term, and finally kicked their first through Bisognin.

With one goal and ten behinds though, their inaccurate kicking had hurt them and they went into three-quarter time down 48-16. There was nothing the traveling team could do in the final term, with the Eagles well and truly putting them to the sword.

Poowong kicked another through Wyatt but this was all the away team had left. Cowan got the last of his four majors through fluent team play and watched his team lock down the Magpies attack at the other end to give themselves a convincing 51-point victory.

The Tigers were kept scoreless in the first term. Longwarry kicked three majors and four behinds in their opening quarter efforts.

The second term saw the visitors finally get on the scoreboard, kicking a single behind. Longwarry meanwhile added another three goals three to their tally, bringing them to 6.743 at the main break.

But the Crows slowed down in the third term, Lang Lang and the wet and muddy conditions keeping them from scoring anything more then two behinds. The Tigers also added a minor score to bring the tally to two points. The final term gave the Crows an opportunity to increase their score line.

Two majors and three behinds were kicked by Longwarry’s forwards. Lang Lang were kept to just an additional four behinds, bringing their final score line to 0.6-6 to 8.12-60.

Working hard on the Nilma Darnum turf, Nyora have earnt their seventh win for the season.

Taking on the wind in the first term, Nyora was lucky to finish off the quarter with three straight from the in-form Ben Schultz. Making his mark from the get go, his forward presence was hard to handle. Schultz’s domination has grown, his kicking accuracy now paying dividends at the business end of the season.

With consistent performer Nick Fairbank and the long-awaited return of Aiden Cumberland, the two were a strong team in their forward direction. Making moves was challenging at the best of times, but with a short interval with some sunshine, Nyora made their mark scoring three goals in the second term.

Holding on to this momentum, Nyora continued their on field and scoreboard pressure, consistent football comparable to last year’s final form.

Standing tall in the backline, Kallon Rigby was Nyora’s defensive Saint, his mobility from defence moving forward with the ball and direction was a big part of Nyora’s solidarity. Schultz finished with a whooping nine goals and one solo point.

Without a multiple goal kicker, Nilma Darnum struggled to bite into the score deficit. They had periods of good play, Jack Ruddell worked hard, defensively leading his side. Nic Murray and Ben Campbell were the locals most reliable players, making a valued impact with and without the ball.

Beating Nilma Darnum on their own turf is no small task, the work rate of the visiting side highlighted by young Ben Lineham. Lineham played his under 18s role on the ball swapping forward, and backed it up with a seniors game - playing on the wing and forward flank.

The work rate of Lineham is comparable to his thirds coach Dylan Heylen who has helped recruit a number of the thirds side and also captains the seniors. Lineham and Heylen are a big part of what makes country football possible. It's getting to the end of the season, so its time to start entering your votes in to Sports Vote Count. A comprehensive and fully functional vote count and presentation program all in one, now with video capabilities. 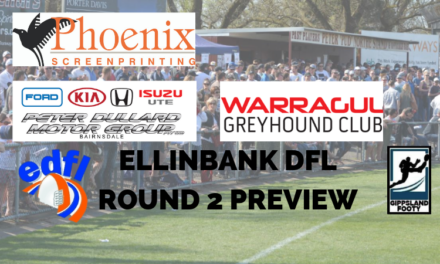