Gippsland Power locked up a top two spot on the weekend with an impressive 29-point win over fellow top four side Murray Bushrangers. The Power held the Bushrangers scoreless in the opening term, opening up a 16-point lead by quarter time. They extended the margin to 22 by the main break, before a Zane Barzen-inspired Bushrangers outfit hit back. They missed a few opportunities but cut the deficit to 16 by the final break, before Gippsland booted the only two goals of the final term to record a comfortable win and lock up second spot on the TAC Cup table.

Riley Baldi was sensational for the Power, racking up 31 disposals, seven marks, seven clearances, five tackles, two rebounds and a goal. Captain Xavier Duursma continued his good form with 26 disposals, three marks, six inside 50s and a goal, while key forward Noah Gown slotted three majors from 14 disposals and five marks (three contested), but could have had more, slotting four behinds. Brock Smith played one of his best games of the year in defence amassing 22 disposals, four marks, two inside 50s and seven rebounds. In defence, Kyle Reid did a great job on the competition’s leading goal kicker Hudson Garoni, while Matt McGannon was clean with his 11 touches, three marks and five rebounds.

By his own accord, Duursma took time finding his feet in this game, but had a real impact on proceedings in the second half. He started off in typical fashion, on the move at stoppages and looking to push the ball forward quickly with his burst and clearance nous, while finding more ball on the outside in the second term. Some of his best moments came through his sheer presence around the ball, with a good bit of harassment in the third quarter leading to an Austin Hodge goal, and another repeat effort almost gifting Noah Gown one. He was clean in tricky conditions and showed his mix of class and toughness with a Worpel-esque hard ball get, shortly after he had evaded an opponent and dribbled through the sealing goal. A good testament to his character was that he told TAC Cup Radio he had to finish shaking hands with the opposition before giving a post-game interview – the kid is a ripper.

Fresh off a great showing in the Under 17 Futures game for Vic Country, Baldi continued his impressive form through the midfield. He’s a master extractor, always busy at the stoppages and ever-present at the centre bounces in his long sleeves. He started off well with good attack on the footy, and his courageous marking attempt in the first term almost led to a Luke Williams goal. Baldi also showed he is a good judge of the ball in flight, with numerous marks taken as the ball came from high over his shoulder – one of which led to his highlight for the game in a clever snap from the boundary. He missed a couple more chances to hit the scoreboard, but his work rate to create those opportunities was fantastic to see, with one coming from an intercepted kick-out. It was a consistent showing throughout the day from the bottom-ager, one to keep an eye on for next year.

The Hawthorn Next Generation Academy product was a little quiet throughout the game, but only needs a few touches to have an impact. He showed his typical flashes of brilliance though, handing off to Fraser Phillips for the first goal of the game, flicking out another to Josh Smith before he missed the shot, and taking the ball at speed in the midfield. He spent a good amount of time at the centre bounces, and was close to bursting away for some highlight reel clearances, but couldn’t quite break away.

While Hodge didn’t rack up his usual amount of possessions, he managed to have an impact in a slightly different role. The over-ager started off finding a good amount of the footy between the arcs, but looked most damaging later on in a more advanced position. He kicked a nice goal on the run from just inside the 50 in the third term, but he would be disappointed not to have converted the two or three other chances he had in the second half.

Smith was part of Gippsland’s solid defensive unit, breaking down Murray’s attack and swiftly moving the ball out of danger. His rebounding was good in the first half as he often chose to kick long down the line, despite coughing the ball back up on occasion. While Smith made him earn it, he struggled during the third term to keep Zane Barzen quiet as Murray made a late push, but overall racked up a good amount of footy and did a good job of mopping up.

Smith was solid in the ruck with plenty of numbers around the stoppages and hitting his targets with his taps. He also worked well around the ground and found the ball in good areas inside 50, but couldn’t hit the scoreboard with two snaps falling short. He still managed to claim an assist for Riley Baldi’s goal with a long bomb into the pocket.

Another Gippsland product that starred in the Under 17s game, Phillips had an influential first half. Sporting two different coloured boots, Phillips booted the first goal of the game with a nice snap. He was front and centre at a heap of stoppages and pushed up the ground from half-forward to win more of the ball. His twists, turns and handball-fakes confused opponents and gave him time to deliver the ball on his left foot. Phillips had a particularly smooth turn in the second quarter which led to an inside 50, but unfortunately looked to have limped off later on.

Arguably the in-form key forward of the competition, Gown continued his tremendous second half of the season with another three goals. He looked strong one-on-one with solid contested marks and led up hard at the footy all day. Perhaps the most impressive part of Gown’s game was his work rate and physical presence, with a hard-earned holding the ball tackle in the first term followed by an intercept mark from a kick-out, a shepherd which allowed Harrison Pepper to run into an open goal, and repeat digs at the ball to almost claim an overhead kick goal. The unsurpassable highlight of Gown’s day however was his sensational goal from the boundary from about 40 metres out, with a long hoof somehow bouncing its way through the middle.

While Reid didn’t have much to do at times, he led the Gippsland defence well and was solid as ever. He did a good job on the dangerous Hudson Garoni in keeping him goalless, while also calmly rebounding out of defence by foot. 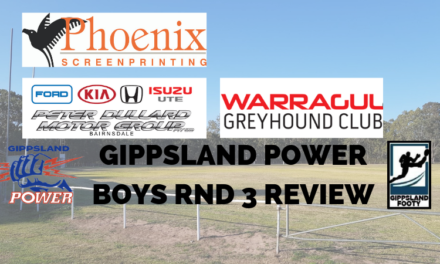