What time is the seniors game scheduled to start?: 2:30pm, Saturday September 15th Fine margins have been a hallmark of the Alex Scott & Staff West Gippsland Football Netball Competition and that is not expected to change when Phillip Island and Koo Wee Rup lock horns in this weekend’s grand final.

The two sides, along with Nar Nar Goon and reigning premier Inverloch-Kongwak, could only be separated by percentage at the end of the home and away season and both have cause for optimism heading into the decider at Garfield Recreation Reserve.

The Island took some time to find their feet under new coach Beau Vernon but are unbeaten since round 10 and took a direct route to the grand final with a win against Saturday’s opponent.

The Demons had to navigate three weeks of finals but did so with two impressive wins against The Goon to book their place.

Should the Demons triumph it will be third time from four meetings they have beaten Phillip Island this season, while defeat would mean the Bulldogs had bested them on the big stage on both occasions during the finals series.

Phillip Island coach Beau Vernon has experienced the highs and lows of grand final day, having coached Leongatha to the past three Gippsland League deciders for one win.

Vernon joined the Island this season and was relishing another opportunity to be involved on the final day of the season.

“It’s just about focussing on the right things and making sure we play our brand of footy,” Vernon said.

“From a club point of view we’re excited to have six teams in there on grand final day and there’s a really good feeling about the place.”

Vernon said playing one game in three weeks could be challenging but was confident the pros outweighed cons as far as his side’s preparation was concerned.

The Island are set to regain defender Mark Griffin, who was only held out of the second semi-final as a precaution, following his recovery from an ankle injury that has kept him sidelined since round 16.

Demons coach Ben Collins said the club resisted the temptation to rush him back for the preliminary final to ensure he was cherry ripe for grand final day – a risk that paid off.

Should Paynter and/or Walker not get up, Jesse Hand and Ben Miller and among those in the mix to step in.

Conditions could yet be a major factor, with predicted wet weather likely to play into the hands of the bigger-bodied Bulldogs.

However, the surface at Garfield is more forgiving than most and Collins was hopeful his side’s run and gun approach would not be too affected.

“It looks like it’s going to be wet so that’s an advantage to them but Garfield is a better deck so we should be able to keep our feet better than we did in the second semi-final,” Collins said.

“They were better team and deserved to win but we’ve come front behind to beat them in our two other games this year and we felt we had opportunities to do that in the semi-final as well.”

The Demons got back within 11 points before a couple of quickfire goals to Aaron Edwards put the game out of reach and Collins and co turned their attention to the preliminary final.

If Koo Wee Rup is to win on Saturday, it will end a 37-year wait for a flag, but Collins said that would just be a bonus.

“The drought is the footy club’s drought not ours,” he said.

“If we can break it, fantastic, but we’re not going to take that on and put too much pressure on ourselves.

“I’ve been involved in a few flags and if you beat yourself up and build things up too much you’ve got no chance.” 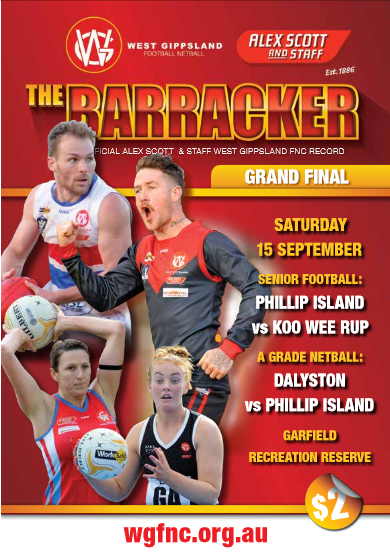