Bendigo Pioneers made it back-to-back wins and their third victory for the season, with an impressive 62-point win over Gippsland Power at Epsom Huntly Reserve on Sunday. In what was arguably their best performance in their short history, the Pioneers controlled the game from start to finish, finally adding the scoreboard pressure in the second half that they had trouble with in the first thanks to blustery conditions. Kicking against the wind in the first term, the Pioneers could only manage the one goal, before piling on 11 behinds for one major in the second term as they headed into the break with a 25-point lead and Elizabeth Snell with both goals. Snell would finish with five for the game, as the Pioneers ran out 8.15 (63) to 0.1 (1) winners, with Gippsland scoring a late behind to ensure they got on the board, while the Pioneers manoeuvred through the strong breeze in the second half, booting 6.2. Snell was the star up forward with her five goals from 14 disposals, five marks, four inside 50s and four tackles, while the midfield combination of Brooke Hards, Annabel Strahan and Hannah Stewart was dominant across the board. For Gippsland, Matilda Van Berkel tried hard in defence with 16 disposals and two rebounds while assisting in the ruck with 13 hitouts, while Chandra Abrahams laid eight tackles from 12 disposals, always in amongst it with Megan Fitzsimon, Cailin Robinson and Maddison Shaw.

One of Gippsland’s more impressive players through the midfield, she just refused to give up, constantly attacking the ball and the ball carrier. She showed good smarts to cleverly tap the ball along the ground in the first term and was unlucky not to be paid a mark in the final term when she flew for a specky. Her long kicking was a help in the swirly conditions and even with the game out of reach, Abrahams continued to crack in hard and win the ball.

Tried hard throughout the day and her powerful kicking was on show when she was able to win the footy. Not a huge possession winner in the loss, she provided great defensive pressure and tried to kick long at every opportunity.

Battled hard through the midfield and half-back, attacking the ball and using quick hands under pressure. One of the better Power players on the day, she laid a number of big tackles and was mostly right at the coalface trying to get the ball out.

Her defensive efforts were noticeable in a game that was highly contested at times. She had a quick gather at half-back and able to kick out of trouble in the first term, and then led up at the football along the wing in the second term, unfortunately just slipping from her grasp. Andrews was another Power player who showed a fierce attack on the ball carrier and had good second efforts, taking a good intercept mark late in the game and kicking long.

It was a tough day to be a forward in these conditions, especially with how impressive the Bendigo midfield was in this match. Webber did get to show off her versatility after quarter time, playing through the midfield and even full-back. 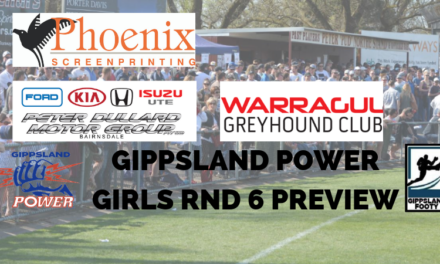