Round 1 of the 2022/23 NTFL season saw a handful of Gippsland players stand out. Named in best and had more for of the football than anyone on the ground. Registered 29 disposals (11 contested), 12 marks, 5 clearances, 5 tackles, 9 inside 50’s and 4 goals. Named best-on-ground in a highly praised performance in his NTFL debut. Had 21 disposals, 5 marks, 32 hit outs, 4 clearances, 5 tackles and 4 inside 50’s. 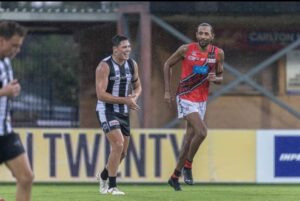 Hit the scoreboard with 3 goals. Also notched 10 disposals and 4 marks. One of the Buffaloes’ best in their win over Wanderers. Finished with 24 disposals, 7 marks, 4 clearances, 7 rebound 50’s and 1 goal. Gippsland players in NTFL: Round 16 review