In Round 5 of the TAC Cup, Gippsland Power boys take on Eastern Ranges at Healesville Sporting Complex on Saturday 28th April at 2:30pm

Gippsland Power has been one of the surprise packets so far this season, notching up three wins and a draw from five games, with the only loss coming against a dominant Dandenong Stingrays outfit. Even then, the Power took it up to the ladder leaders and have been ultra impressive with their speed and willingness to switch play and take the game on, not too dissimilar to the Stingrays themselves. For Eastern, their defence has held up well all things considering, but they are struggling up forward to put scores on the board. They are yet to taste victory, but will be hoping they can cause an upset and take down the consistent Power outfit.

Eastern had just six less inside 50s than the Geelong Falcons last week, but had 17 scoring shots to 27. They were soundly beaten in the clearances, with Kye Quirk notching up 25 disposals, five clearances and four inside 50s to be the most prominent midfielder, while Chayce Black and Lachlan Stapleton were also strong. Stapleton’s reputation as a tackling machine continued as he notched up 12 tackles. In this game, Eastern just needs to get first hands to it and make the most of its opportunities considering Gippsland has some serious pace. The defence for Eastern is well drilled and will hold up well, but need the transition forward to be a little cleaner. James Blanck is continuing to be a surprise packet in defence for the Ranges and he will no doubt have a key role tomorrow.

Gippsland have the air of X-factor about them, with plenty of pace and excitement. Sometimes the young side can make mistakes which cost them, but they roll the dice – as we saw in the final play last weekend – and take the chances they need to take in order to try and get the result. Jake Van Der Pligt looks to be another bottom-ager Gippsland have uncovered with serious talent to add to the ever-growing list of bottom age potential. They lose Rylan Henkel this week after he provided strength in the middle in round four, but regain captain Xavier Duursma, and forward Sam Flanders. In every Gippsland game you expect them to provide the heat and a real contest, but heading into this game, they go in as genuine favourites and while Eastern’s defence is a strength, the Power will look to unsettle its opposition with unpredictability throughout the game. 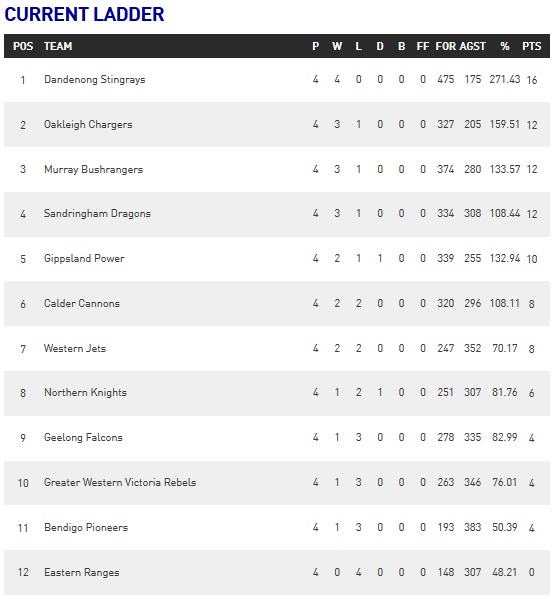 Gippsland girls to feature in VIC Country Under 18’s squad