Here are the results for the opening games of Round 1 on Easter Saturday.

REIGNING West Gippsland premiers, Inverloch-Kongwak, started the new season in sparkling form last Saturday when the pulled away from last year’s runners-up, Cora Lynn, in the final term of what had otherwise been a tight, sometimes willing affair.

The only downside was an injury early in the game to utility defender Dylan Clark who reportedly broke his collarbone.
Cora Lynn was giving as good as they were getting on the ball and around the ground but after blazing away and seeing the ball cleared, they opted to work the ball more methodically into the forward line and it paid dividends with their first.

There was a lot to like about IK’s defence on Saturday with the likes of Xavier Hughes getting loose to provide good run and Shem Hawking, as ever, working hard in the transition.

It’s only just two seasons into the new West Gippsland comp but already IK and Cora Lynn are building up quite a rivalry; the Cobras used to being top dogs in their former league and IK now coming through to assume that mantle.

Former Poowong ruckman Connor Cunningham looks to be the ideal pick-up for IK this year, initially taking a turn in the key defensive post but also getting a run on the ball in what looks to be a winning combination with Clint McCaughan this year.
Campbell McKenzie and Josh Purcell are others who showed early season form on Saturday but right down the list, there was plenty to like about IK and the side barely had a passenger all day.

Since his very first game as Demons head coach, the success of Collins’ sides has depended largely – more than anything else – on their defensive intensity.
While that was no different on Saturday against Phillip Island, it was three other characteristics not always associated with the Demons that stood out most to the neutral observer – resilience, calmness, and ultimately ruthlessness.

It was a finals-like atmosphere on Easter Saturday – a quality opposition, a bumper crowd, and warm weather to boot.
And the opening stanza had the pressure to match. New Demons recruit Dom Paynter made his presence felt almost immediately, getting involved in the first passage of play, and slotting the first goal. But by quarter time he was on the bench with a hamstring injury.

Jaymie Youle, Zak Vernon, and Leigh Warne were all particularly influential early while it was the likes of Dave Collins, Troy Dolan, and skipper Tim Miller who loomed large for the Demons.

The physicality of the likes of Griffin, Youle, Kimber, and Taylor kept their side on top, and at the 20 minute mark of the third term the home side was up by what seemed like a telling five goals.
A late goal from hard up against the boundary from Voss trimmed the deficit back, but still it seemed the Bulldogs would have the answers when questioned.

The Island were missing some of their A Graders, including the likes of ruckman Nick Higginson, Jarrod Witnish, and new recruit Hayden Bruce who won the VAFA’s Under 19 Premier best and fairest last year while with Beaumaris, which drew the eye of the Richmond VFL side.
But that didn’t take away from the Demons’ barnstorming finish with the likes of Mitch Collins in the ruck, Dave Collins and Tim Miller switching from half-back through the midfield, Anthony Giuliano playing deep in defence, the hard-nosed Troy Dolan rolling up his sleeves through the middle of the ground, and vice-captains Nathan Voss and Luke Walker leading by example. 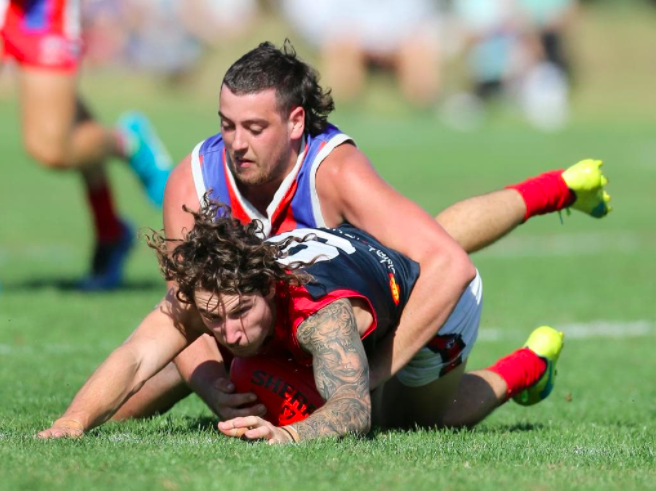 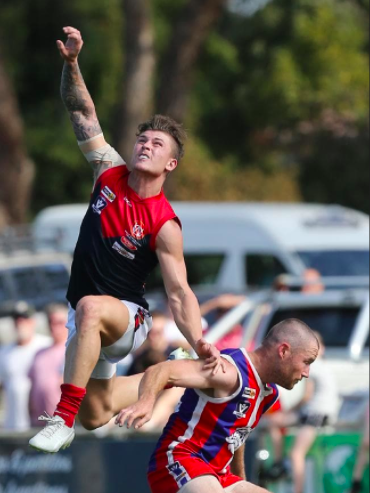 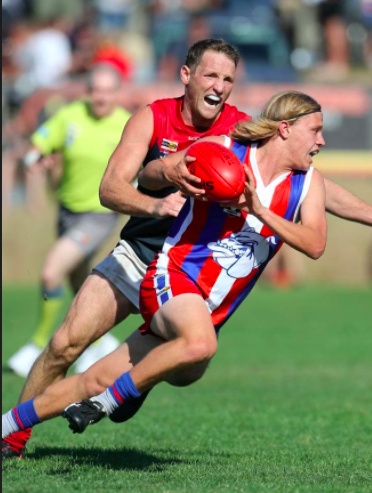 All photos by Yuri Kouzmin for The Weekly Times. To view all 29 photos visit https://www.weeklytimesnow.com.au/sport/country-football/koo-wee-rup-v-phillip-island/image-gallery/89f772311ac32721b535a998915253b8