Phillip Island has bounced back after a week over with a dominant display over Kilcunda-Bass on Saturday.
The old rivalry match started well with both sides snagging early goals and putting plenty of pressure on their opponents. Perfect conditions for footy allowed for some nice passages of play from both sides. Taylor Gibson was looking strong up forward for the Panthers as always and he kicked truly after a contested grab to even the scores. From here it was the Island which started to take control around stoppages and launch the sherrin forward. The Bulldogs were able to kick two more goals to extend their margin to 15 by quarter time.
The home side was looking far better than the travelling Kilcunda-Bass but they were yet to really blow the game open. The Panthers started okay in the second term but it did not take long for Phillip Island to really start pouring on the goals. A small but very fast and strong forward line proved too much for the Panthers as the Island booted six goals to zero in the second term. Brendan Kimber and Jaymie Youle were on fire up forward, kicking nine goals between them. Both of the contested ball guns seemed to get on the end of every forward entry and with not a breath of wind, both were able to kick very straight. With Kilcunda-Bass only scoring three points for the term the lead was out to 50 points by the main break and Phillip Island seemed determined to devastate its rivals.
Zak Vernon was on fire in the midfield for Phillip Island and his strong performance continued in the second half. He continued to gather contested possessions then use his pace to break out of packs and hit up leading forwards. Jake Weightman and Aiden Paton battled hard down back for Kilcunda-Bass but the constant entries were too much to handle as Phillip Island kicked another seven goals 1n the third term.
Jean Bezzene also fought admirably in the middle for Kilcunda-Bass and was also able to snag a couple of goals to reward his efforts. With the lead already at 90 points, Phillip Island wasn’t going to rest on its laurels in the last term. However, Kilcunda-Bass put in a much greater effort and allowed just the three goals for the quarter. The final siren sounded, making the home side 106 point victors.
Next week, Kilcunda-Bass will face another very difficult task when it hosts Inverloch-Kongwak, and Phillip Island will need to regenerate its momentum when it hosts Cora Lynn.
Sam Watson

Trailing by a point up against the struggling Magpies at quarter time, Garfield’s indifferent form looked as if it may continue before the Stars lifted.

Thirteen goals to five after quarter time resulted in comfortable victory for the Stars, although the Magpies were still in touch into the final term.

Three goals to one in the second term opened up a small buffer at half time, the Stars heading into the final change leading by 19 points having taken the edge in a tight third term.

Inverloch Kongwak received a serious wakeup call from Nar Nar Goon following the last quarter of their big clash on Saturday.
The reigning premiers were facing one of the aspiring challengers to their WGFNC throne, and at three-quarter time with a six goal lead having kept their opponents to just four goals to that point they looked home. The problem for Ben Soumilas' men was that they played like it in the last ultimately letting the Goon back to within 14 points, 11.7 (73) to 8.11 (59).
As he often has the tendency to do, Soumilas succinctly, yet perfectly summed up the clash - specifically its closing stages - in the immediate aftermath. "We're a mentally strong side that finished the game mentally weak," he said.
Now, those comments could easily be taken out of context for those who didn't see the game. But they were delivered to serve a reminder to the playing group of what can happen when they switch off when they go from performing like a V8 racer to a four-cylinder family car.
Just as it has been to date, Nar Nar Goon will likely remain one of the competition's leading sides for the rest of the competition. They're strong in all areas of the ground, and still had the likes of ruckman Matt Stevens and crucially important backman Tyler Payroli missing from Saturday's side. Yet they took a three-point lead into quarter time but added just three majors over the second and third terms the period in which the Sea Eagles strangled the life out of the contest with their seemingly insurmountable pressure. While Trent Armour and Jake Blackwood shone all game, some of the Goon's best users by foot seemed panicked in the face of the Sea Eagles' set-up.
But in the last term, they broke the shackles and added four goals to just one from the home side. It was played in a polar opposite way to quarters two and three, and the question is did they break the shackles, or did the Sea Eagles accidentally loosen them?
Troy McDermott finished with five goals after playing a starring role in the last, but he and the rest of the Goon forwards more than had their hands full over quarters one to the three as the Sea Eagles controlled the momentum. The composure, toughness, and ball use of Lewis Rankin was a key reason why, while the likes of Andy Soumilas and Adam Cross despite both being in their mid-303 tackled like teenage players with everything to prove. Shem Hawking, Tom Wyatt, and Michael Bales were also clear standouts when the game was there to be won.
But let' s rewind a second - back to 'with everything left to prove'. In the last quarter on Saturday, the Sea Eagles played like a side with absolutely nothing left to prove. They're the all-conquering reigning premiers and have been rampant so far this season. But if they want to stay that way, and go back-to-back as so many say they will, they'll need to keep Saturday's final term front of mind as a stark reminder of what another premiership aspirant can do when they get a sniff.
It should be noted that Inverloch was missing the likes of Toby Mahoney, Josh Purcell, Dylan Clark, Josh Clottu, and Will Hetherington on Saturday - each of them absolutely crucial to their cause. And after the clash, Ben Soumilas admitted that had played on his mind somewhat. "I'm still confident in, and happy with, how the boys performed but I've probably got to change my views a little bit because I was still focused this week on who we had out. "There are five players there who I would have happily picked for interleague and I was too focussed on it (not having them available). "So, I couldn't be happier that when the heat was on we had 21 who did the job and got it done.
"Every side at our level relies on their good players, but when you have players like Adam (Cross) and Andy they had 23 tackles between them."
One Nar Nar Goon player who fans will be looking out for on the field this Saturday against Koo Wee Rup is Jake Smith, who was forced from the field just nine minutes into the Sea Eagles game following a concerning reaction to a knock before ultimately returning to the field later in the clash.
Russell Bennett

The Bulldogs couldn’t sustain the effort as the Demons resumed control, kicking 10 goals to three in the second half to run away with it.

THE game started at a fast pace and Cora Lynn were the first to get a goal on the board but the Korumburra-Bena Giants hit back with goals to the key forward Will Jeffs and Matt Kennewell.
The Giants' Nick Wylie, entering a pack to get the ball. went down injured and the game was held up for nearly 20 minutes while he was attended to. It looked serious and staff from both clubs, Korumburra-Bena and Cora Lynn combined to render assistance which was greatly appreciated and a show of fine sportsmanship by the Cobras.
The game resumed and Cora Lynn kicked two late goals to cut the gap to seven points at the end of the quarter; KB Giants 4.3.27 to Cora-Lynn 3.2.20.
Cora Lynn again started the quarter best with an early goal but the Giants returned fire through Jeffs who was awarded a free kick and made no mistake. But the quarter was characterised by Cora Lynn’s running and better use of the ball, putting the Giants’ defenders under constant pressure with the result that they kicked two more goals to hit the lead. The Giants pulled one back close to the break when Kennewell marked and goaled and there was only four points in it at the break; Cora Lynn 6. 7. 43 to KB Giants 6. 3. 39.
The third quarter was a forgettable affair by both sides with both defences well on top and neither team able to take the initiative when in range of the goals. Crucially though, Cora Lynn was able to kick a late goal to retain the momentum going into the last quarter, Cora-Lynn in front 7.10.52 to KB Giants 6.6.42.
The Giants drew closer with the first goal of the last quarter after Fitzgerald finished off a good attacking move when he snapped a line goal. They could easily have had a second straight after that but instead of going direct, a poor option to go sideways resulted in a turnover and Cora Lynn raced the ball downfield for a goal. Throughout the last quarter, the Giants continued to attack but more turnovers proved costly when the better option would have been to target McMillan, Edwards and the other key forward who had proved themselves quite capable of marking the ball or at least bringing it to ground for a potentially dangerous contest near goal. Cora Lynn took full advantage and kicked three late goals but it was clear the Giants were right in the match in the general play and some good wins against fancied opponents is certainly within their grasp.
South Gippsland Sentinel Times 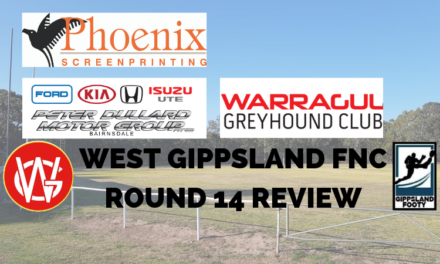 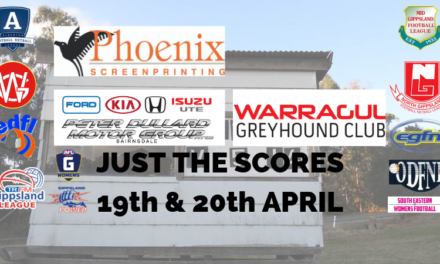