Ladder leader Yarram continued to command the North Gippsland league senior competition in round six and remain undefeated after a resounding win over Glengarry on Saturday, 15.19 (109) to 6.8 (44).

The Demons were decimated by injury and had an empty bench in the last quarter after losing Griffin Underwood and Jarryd Swift to hamstring strains, Shem Rendell to general soreness and the late withdrawal of Dan Vardy before the first bounce.

Yarram coach Matt Scholz was buoyed by his side’s ability to grind out the full game despite the loss of several key players.

“The pleasing thing was that we fought out the four quarters,” Scholz said.

“Our ability to win the contest and then with our forward entries, we had a lot of them.

“We could have used it a lot better and we kicked 19 behinds, but that persistence and being able to turnover Glengarry’s footy in the middle and rebound it back was really good.”

Chris Bruns featured in the best on ground votes for the third consecutive week and was handy through the midfield and up forward.

Louis Rodaughan returned from injury with ease and slotted right back into the side with a best on ground performance and two goals.

Scholz earmarked Underwood as a likely starter for round seven’s grand final rematch against Sale City while Swift will miss and Vardy and Rendell will be assessed later this week.

ROSEDALE kicked four goals to one in the final quarter to win a North Gippsland football thriller at Heyfield by three points.

The Blues moved into fifth place on the ladder following their fourth win of the season.

The Kangaroos remain in seventh place on the ladder, but are now two wins outside the top five.

SALE City showed little mercy against Cowwarr, with the reigning premier winning by 122 points at home.

The Bulldogs set the tone early, kicking eight goals to one in the first quarter to lead by 45 points at the break.

The second quarter was more even, with City booting four goals to three, before the Bulldogs kicked four unanswered goals in the third to stretch their lead to 81 points by the final change of ends.

The Bulldogs finished the match like they started it, booting nine goals to three.

Patrick Tainsh and Brett Grieve were best for the disappointing Saints.

The Bulldogs will face a tougher challenge next weekend, when they travel to Yarram to face the undefeated Demons in a grand final rematch.

Traralgon Tyers United have solidified second spot on the ladder with a comfortable win over Gormandale at the weekend, 14.12 (96) to 10.7 (67).

The Bombers led at every break and never looked to be in danger throughout the 31-point victory.

Adam Bailey led the way in front of goal for TTU and snared three goals while Lachlan White, Jye Neilson and Tim Aitken all scored two.

Youngster Jordan Jobling enjoyed his first run in the Bombers’ senior side for the year and kicked a goal in a best on ground performance.

Ricky Cochrane, Bill Morrison and Simon Noy were all serviceable for TTU in the win while Luke Francis and Chris Potalej were the best for Gormandale.

The Cougars’ defence was at its indomitable best throughout and allowed the Wildcats a single goal to three-quarter-time.

Churchill coach Chris Williams highlighted his side’s pressure around stoppages early in the game as key to setting up the win.

“I think the pressure probably died off a bit in the last quarter, so we weren’t happy with that but just in the first three quarters the boys did really well around the contest,” Williams said.

While Blake Slater did the heavy lifting in front of goals and finished with five and Williams bagged three, he said it was an even spread of performers that was the difference for Churchill.

“The pleasing this was that we didn’t have any clear standouts,” Williams said.

“But I thought Blake [Slater] was really good for us up forward, [Dean] Degroot up forward as well and they’re probably the two that stood out really.

“I think our back half set up behind the ball well and we were able to transition well from back to forward which allowed us marks inside 50.”

Churchill return home to Gaskin Park to face Heyfield in round seven while Woodside travel to play cellar dweller Cowwarr. 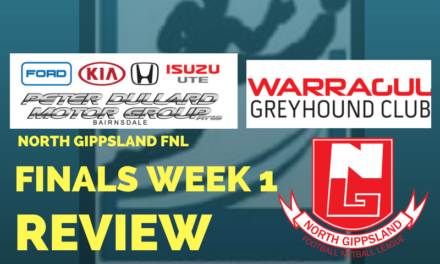