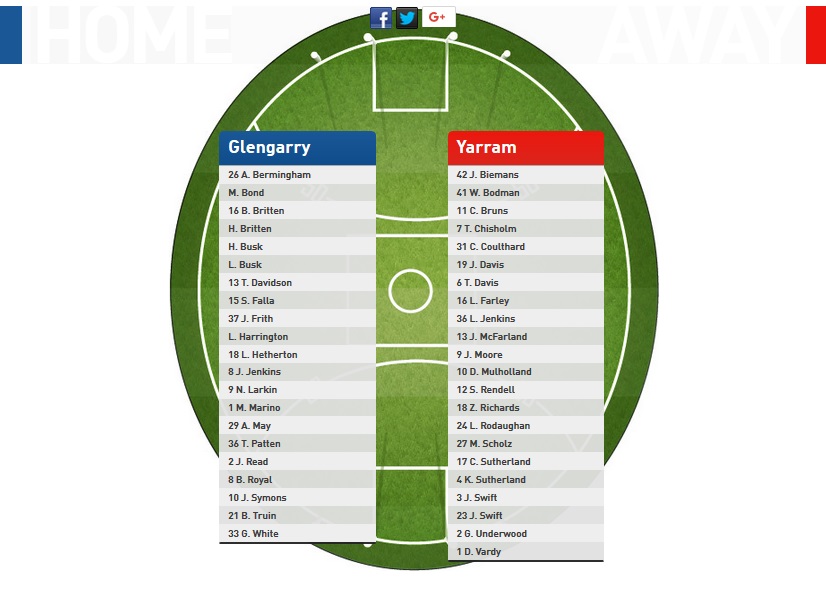 YARRAM remains the top dog in the North Gippsland league following a nine-point win against Traralgon Tyers United in round five, making it the only undefeated senior side.

The Demons will take on ninth-placed Glengarry on Saturday in what is expected to be a one-sided encounter the way of the Demons.

But Yarram coach Matt Scholz was less optimistic and praised Glengarry for its strong list and hard-contested football so far this season.

“Hopefully we’ll get out and spread and run and carry,” Scholz said.

“It’s going to be a really tough one, Glengarry have got some good players so after a hard-fought one this week and going to a bigger ground … we’ll work on a few things this week but we’re going to expect another hard game against them.

“Hayden Britten is very handy, his brother [Ben] as well, he’s really good and [Chris] Wangman is very handy, so we’ve got to sort of make them not as dangerous as what they can be – that will be a priority.”

Glengarry head into the must-win clash following a four-point win against Cowwarr at the weekend, as Scholz flagged a larger ground as a key area to work on ahead of round six.

“We’ll be focussing on what we’ve been doing so far and probably adjust a little bit for the ground this week, it’s a bit bigger so we’ll adjust on that and keep doing what we’re doing because we’re playing some really good footy,” he said. 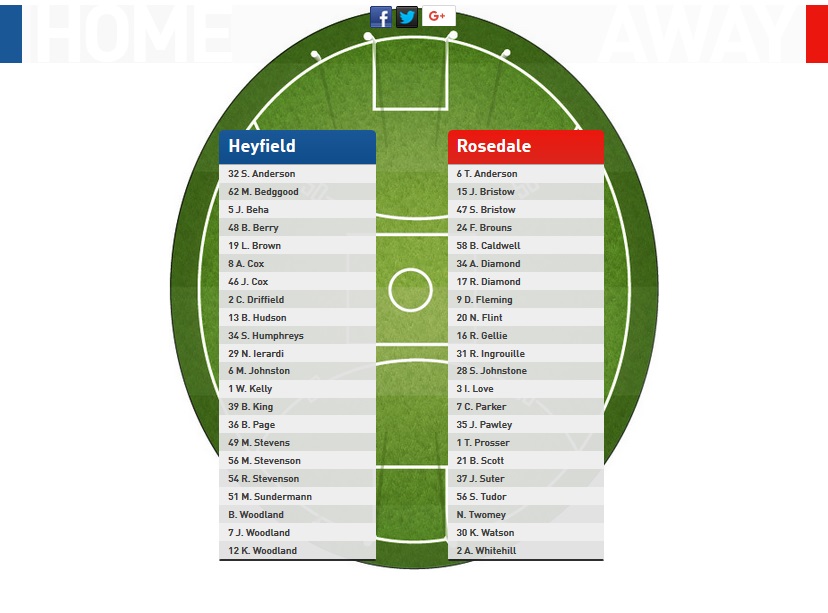 SAM Bristow is conscious Heyfield have a few former AFL footballers in their side who could prove to be a problem for Rosedale this weekend.

The Blues coach said their experience alone could be a defining moment in the game when Rosedale hit the road to Heyfield on Saturday.

“They lost to Yarram but they really took it up to them last week and it doesn’t matter what anyone says, they’re going well and they’re always a tough ask,” Bristow said.

“The likes of Mark Stevens, Leigh Brown, Adrian Cox … then they’ve got good blokes all around the ground as well like James Beha and Matt Bedggood.

“They’ve got blokes that have been at the top level and they’ve been one of the best teams in the competition for the last five to 10 years.”

However, it should be a fairly even contest on Saturday with Rosedale and Heyfield sitting sixth and seventh, respectively.

Both teams also head into this weekend following round five wins.

Selected sides: (Cowwarr side unavailable at time of post) 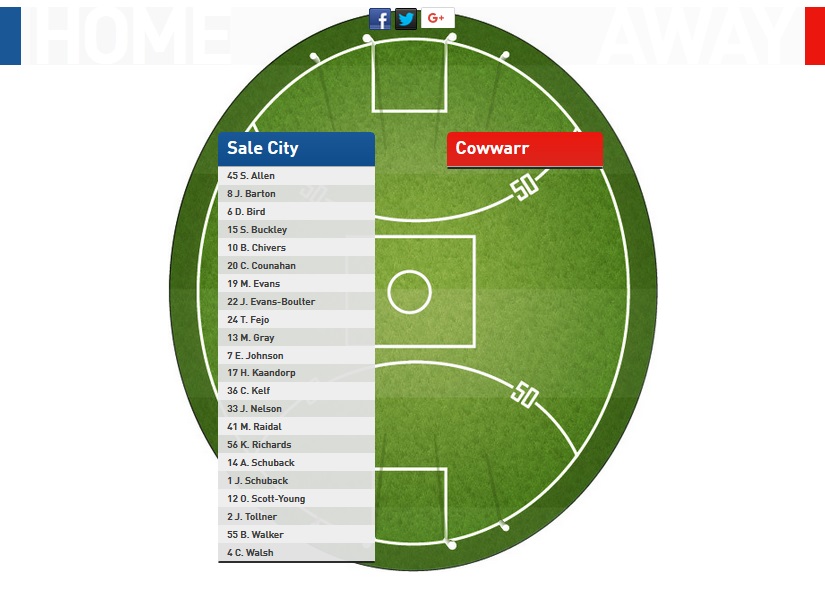 Sale City will host Cowwarr in a fifth versus 10th battle.

The Bulldogs head into the game after a five-point win over Woodside while the Saints will look to improve after a four-point loss to Glengarry.

Sale City have won three of their five games, compared to Cowwarr who are yet to register a win in 2018. 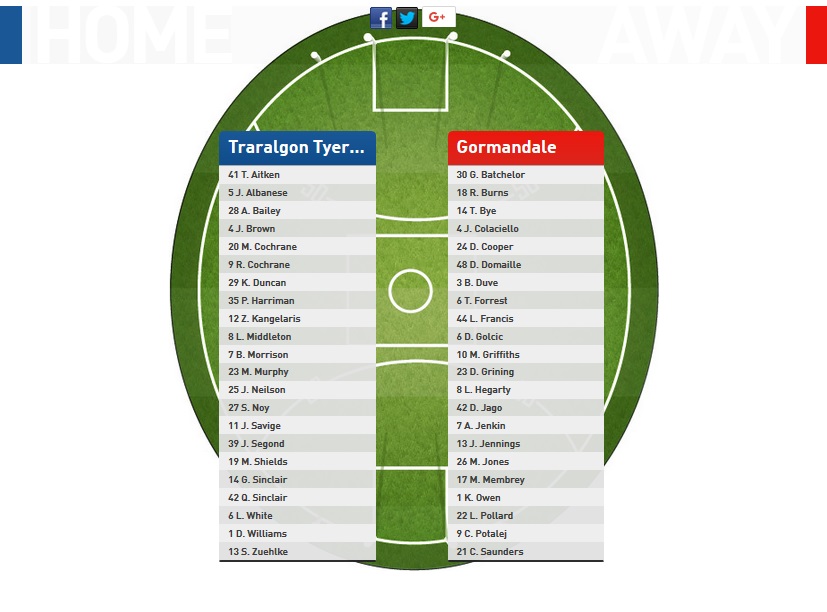 The Tigers have only won one game in season 2018 but Duncan said it was only a matter of time before they bounced back.

“Looking over their list they’ve got a very talented side, some really good players, so it’s only a matter of time until they find their form and I don’t want it to be against us,” Duncan said.

“As for us, well we’re going quite well. We’re still just figuring out how to play with each other and working on our game plans and what’s important to us as a team.

“I’ve been happy with our even contribution, we don’t rely on one or two players. Every week we step up as a team and have different people fill the respective roles for us.”

The Bombers sit second on the North Gippsland ladder following a nine-point loss to Yarram, while the Tigers sit eighth after a 50-point loss to Heyfield, the biggest margin in round five.

Selected sides: (Woodside side unavailable at time of post) Churchill could be in strife with a number of their key players out due to injury following a two-point loss to Rosedale at the weekend.

Brendan Holt, Blake Slater and Ryan Lowrie are all expected to miss several weeks after suffering injuries during the first quarter in the game against the Blues.

It meant the Cougars’ were without a bench for the final three quarters, making it difficult to secure a win for Trav Brighton’s 300th senior game the club.

Churchill president Michael Johnson said the three “fairly big” injuries in round four mean its younger players to step up and fill the void.

Holt is expected to miss six weeks after tearing a quad muscle, Slater two to three weeks due to a leg injury and Lowrie between five and six weeks with a broken hand.

“We lost all the injuries in the first quarter so we knew we were going to be battling from there on in,” Johnson said.

“We do have some younger talent that will step up and fill those gaps but Woodside have been very competitive in all their home games, they love their home ground so I think it’ll be a good encounter.”

The Cougars sit third on the North Gippsland ladder with three wins and two losses only a spot above this weekend’s opponent in Woodside.

The Wildcats also head into the game coming off a loss to Sale City on Saturday after going down to the Bulldogs by five points. North Gippsland FNL ladder and leading goal kickers after Round 5