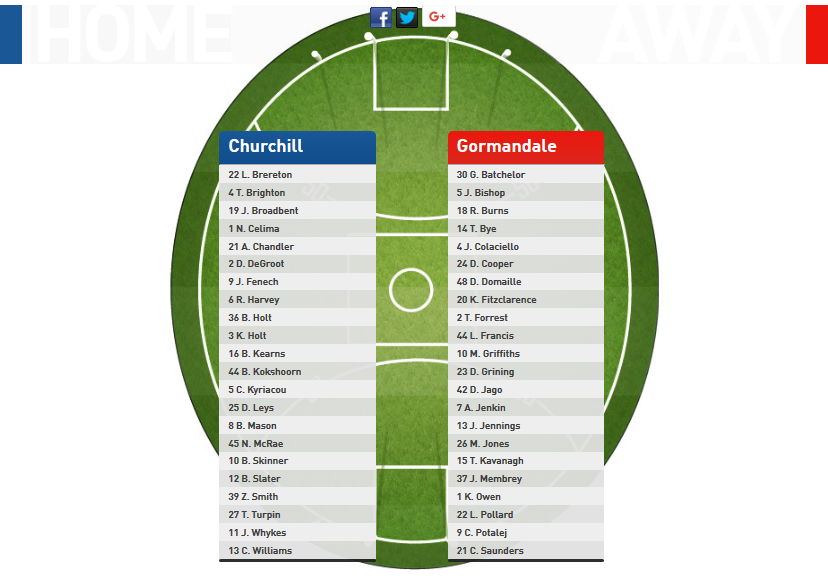 Gormandale surprised punters at the weekend when they held ladders leader Yarram to just five goals until half-time in a performance that gave the Tigers the lead until the third quarter.

Earlier in the season Gormandale coach Steve Hazelman said his side was grappling with injury problems and come the split round, his side would be ready to take on the toughest of opponents.

His comments could not have been more true.

“We started really well. We were five goals up at quarter-time and then in the third quarter we didn’t kick a goal; we kicked six behinds and hit the post twice,” Hazelman said.

Despite the average second-half performance, the Tigers will have another chance to defeat a top-three team this weekend when they travel up the road to play Churchill.

“I’ve been saying all along that once we got back all our top players and had our best team in, we’d be very competitive against all teams and that was proved on the weekend,” Hazelman said.

The return of midfielder Joey Colaciello proved a welcome inclusion on Saturday, despite only playing half a game as the club continues to ease him back after injury sidelined him earlier in the season.

However, the last time these two teams met Gormandale was on the receiving end of a 90-point thumping.

“Churchill probably gave us our biggest loss of the season so we’re really determined to turn that around this Saturday,” Hazelman said.

“They were too big and strong for us and we’re hoping to influence their key players in Brendan Holt, Blake Slater, Ben Kearns and Chris Williams this weekend.”

The Tigers sit eighth with three wins and eight losses, while Churchill sit third with seven wins and four losses. 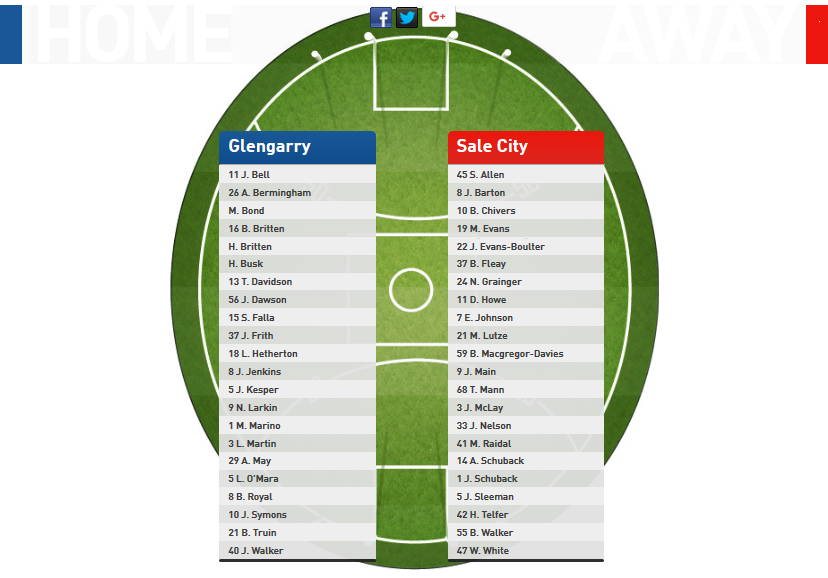 Drew McGrath says it’s not too late for Glengarry to have a crack despite the Magpies only winning one of their 11 games so far this season.

The coach of the ninth-placed Magpies said his side was “looking for a scalp” before the season’s end and was pleased with a decent performance displayed by his team against Churchill last week.

“The boys really turned a corner and started to play some good footy so hopefully they’ll carry that through to this week,” McGrath said.

“There has been a few changes within the playing group as there is with any other senior side but my challenge to the boys is to do better, we just need to improve.”

Glengarry will take on Sale City at home this weekend as both teams head into the game following round 11 losses.

“We’ve got a very promising under 18s group so our goal is to develop the under 18s players and I’ve had about five different thirds kids come through and play for me on different occasions,” McGrath said.

“To have five under 18s step up and play seniors football is a big deal and there’s more to come.”

The Magpies lost to the Bulldogs at Sale in round three by 21 points but will hope for a more competitive performance on home turf this weekend. 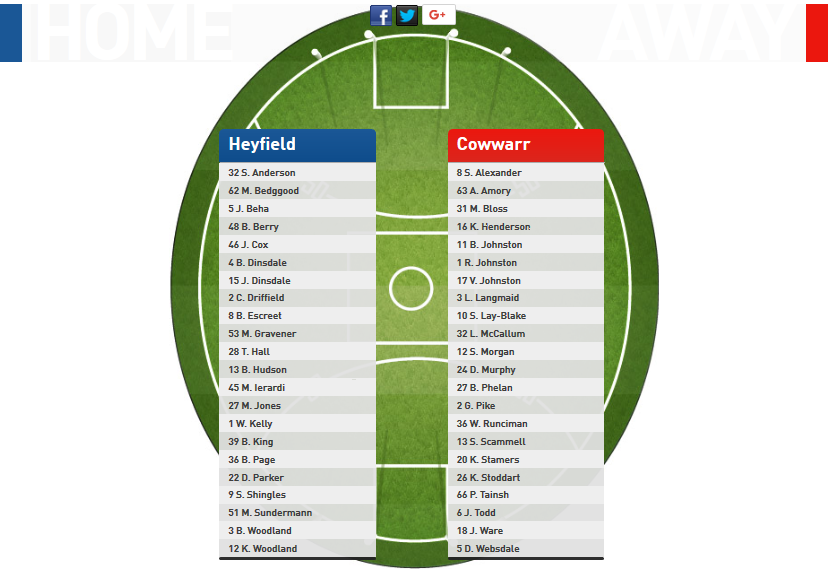 Heyfield will host Cowwarr in a seventh-versus-10th clash.

The Saints are yet to win a game in 2018 and head into the game after a 46-point loss to Rosedale at the weekend.

Heyfield also head into the game after a demoralising 54-point touch up by Woodside on Saturday.

It could be the opportune time for Cowwarr to register their first win of the season after losing by only seven points to Heyfield earlier in the year. Rosedale will hope to improve on their round three performance against Yarram when the Demons walked away 96-point victors – leaving Rosedale feeling the blues.

However, Yarram coach Matt Scholz also has concerns heading into this weekend’s match at Rosedale, acknowledging the Blues were more than meets the eye.

“Last time we did everything right and played really well and I don’t think they were on song, but looking at their past few performances I think it’ll be a close one,” he said.

“Every week so far you’ve got to bring your best and this week is no different, so we’ll go over there prepared but they’re playing some really good footy.”

Scholz remains out injured with a high ankle sprain and is expected to be sidelined for the next few weeks while Tyler Chisholm – who missed last week due to general soreness – is expected to return.

Rosedale coach Sam Bristow described Yarram as the “yardstick of the competition” and said it would be a good benchmark to measure the Blues’ development this year.

“They are clearly by far best team in the competition,” Bristow said.

“They’ve got a number of players that can come up from the reserves, and their reserves side is the best I’ve seen for a long time – they’ve got the talent across the board, hence why they’re just so good.

“I think we haven’t changed a lot [since round three]. It’s more about sticking to our structures and hopefully playing the way we want to play and not get caught up in being dictated to.”

Former best and fairest Sam Tudor is likely to return to the line-up this week after a few weeks overseas. 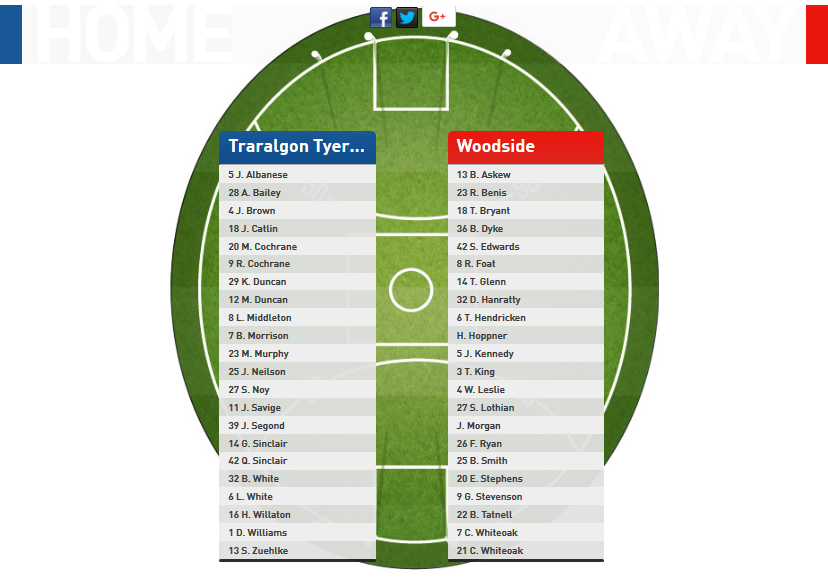 Traralgon Tyers United coach Michael Duncan is optimistic ahead of this weekend’s game against Woodside after the Bombers secured a win despite trailing by 19 points at half-time on Saturday.

“We had a really good effort by our guys; we were down by 20-odd points in the first quarter but managed to come back,” Duncan said.

“We then went down again in the second quarter by 25 points but our boys kept working really hard and played a really strong second half.

“I think every week we take little steps forward, we’re slowing getting better as a group and improving every week.”

The Wildcats, however, displayed impressive form as well on the weekend after claiming a 54-point win over Heyfield which placed Woodside in the top five.

“We’re expecting a full strength Woodside team, I think they had a couple of players out when we played them last time,” Duncan said.

“We’re expecting to get a handful of players back in the next two to three weeks, including Pat Hariman (shoulder), Tyler Mustoe (shoulder) and Tim Aitken back from overseas and Rhys Martin back from work.”

But if previous form is anything to go by, TTU should be in a good position to claim the points after walking away 42-point winners against Woodside in round three.