A six-goal-to-none first term set the Blues up well and coach Sam Bristow said his side “played really well” in the opener.

“Cowwarr, to their credit, really didn’t give up all day. They had a really good second half themselves and I think they really showed.”

The Saints are in the unenviable position on the bottom of the North Gippsland ladder but Bristow said “they don’t play like a side that’s none and 11”.

Rohan Diamond, Brad Scott and Dale Fleming were a handful of the best performers for the Blues in the win.

“Dale [Fleming] was back to near his best and Brad [Scott] played a different role for us on the wing which was really good,” Bristow said.

The Saints will head back to the drawing board ahead of their round 12 clash with Heyfield while the Blues are primed for a rematch with league heavyweights Yarram.

Churchill have returned to the winner's list after consecutive losses in the North Gippsland league senior competition with victory over Glengarry on Saturday, 15.14 (104) to 9.6 (60).

The Cougars sit in third spot on the ladder with seven wins for the season – a game off the pace of Traralgon Tyers United in second.

The Magpies got within 29 points towards the end of the third term but were blown out of the water in the last to lose out by 44.

Blake Slater and Dillon Leys kicked three goals each for Churchill in the win and Zach Smith, Tristan Turpin and Trav Brighton each bagged two.

Traralgon Tyers United went goal for goal with defending premiers Sale City on Saturday before kicking into gear in the second half to romp home to a 27-point win, 16.6 (102) to 11.9 (75).

The Bombers led by two points at the first break and trailed by one at half-time before a four-goal third quarter set them up with a 22-point lead heading into the final term.

Playing-coach Michael Duncan and Jye Neilson led the way for the Bombers on the scoreboard and bagged three goals each while Josh Segond, Jacob Albanese, Hayden Willaton and Billy Morrison each chipped in with two.

The win gives the Bombers some breathing space in second spot on the North Gippsland league senior ladder with a game between them and Churchill, Rosedale and Woodside, who all have seven wins.

For the Bulldogs, Josh Tollner did the most damage and scored three goals.

Stuart Buckley and Bohdi Walker chimed in with two each while singles went to four others.

Ryan Foat led the way for the Wildcats and finished with four goals for the day, Cam Whiteoak kicked three and playing-coach Todd Bryant, Shane Kilgower and Brad Smith kicked two each.

For the Roos, Mathew Jones and Joel Dinsdale each kicked two while singles went to four others.

Woodside are tied with Churchill and Rosedale on seven wins for the season to date and sit in fifth spot on percentage while Heyfield sit in seventh.

The Wildcats will travel to take on TTU in round 12 action this weekend and Heyfield are home to cellar-dweller Cowwarr.

Flag favourites Yarram were shocked into action against a fiery Gormandale side in round 11 and trailed by 30 points at the first break before overrunning the Tigers to seal a 33-point win, 12.15 (87) to 8.10 (58).

"They came out with a good plan and we were a bit slow out of the blocks and just let them dictate terms, and obviously they just got on top of us," Scholz said.

A bizarre first half saw Gormandale score seven goals to one in the first term to set themselves up with what appeared to be a match-winning buffer.

However, the Tigers managed just a single goal and nine behinds thereafter to hand the game to the Demons for their 11th straight win of season 2018.

"We just come back to being first to the ball and getting numbers to the contest," Scholz said.

Brothers Ben and Daniel Vardy were standout performers for the Demons while Louis Rodaughan played well through the midfield and Jake McFarland was a key source of pressure.

Scholz missed for the Demons as he continues to recover from an ankle injury and Tyler Chisholm also missed with general soreness.

For Gormandale, Josh Jennings and Mitch Membrey each kicked two. 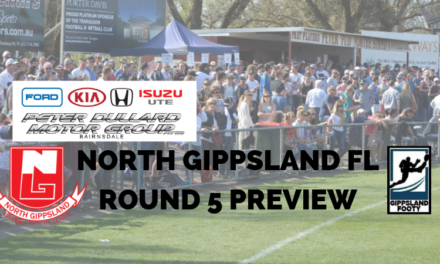