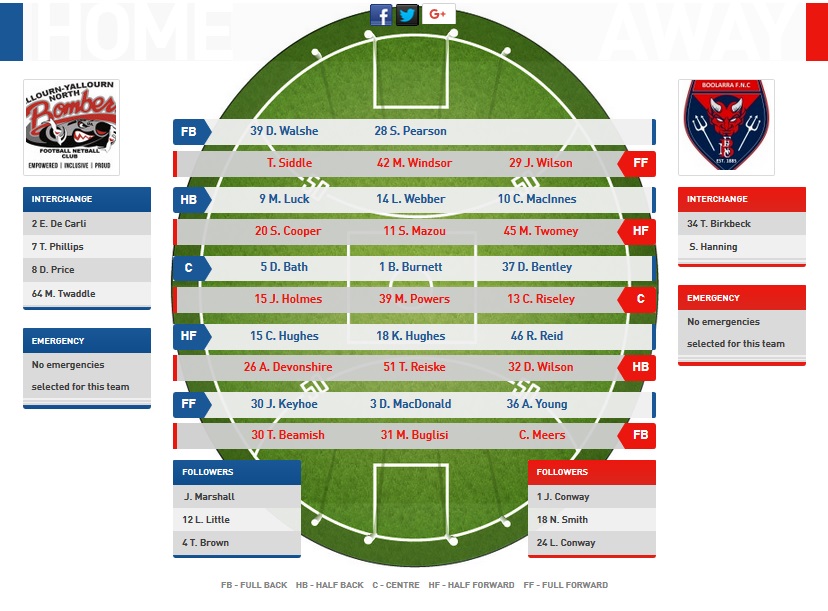 All eyes are likely to be on Bombers full forward Dean McDonald this Saturday, when the leagues leading goal kicker is likely to add a healthy amount to his current tally of thirty six goals after seven rounds.

McDonald has an eleven goal lead over his nearest opponent, but that may be stretched to as far as twenty if things were to go the talented forwards way this week, even if he does continue to share it around as he has done for most of the year.

The Bombers look to be the side that all others will be chasing this season, and none will be chasing as hard as Boolarra, especially on the wide expanses of Yallourn’s home ground.

The top of the table side, has won its past six, and will make it seven in succession this week, heres to hoping Boolarra can walk off the ground knowing that they gave it there absolute best, and if that happens, the result becomes irrelevant, it’s the journey that lays ahead that will provide the demons a time to celebrate. 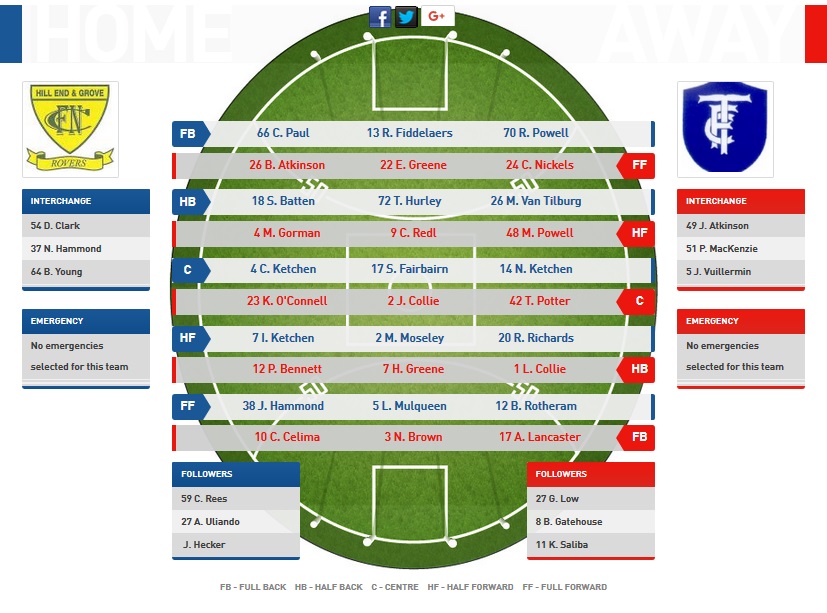 Rovers coach Mike Santo would be wondering if he stepped on a black cat, walked under a ladder, broke a mirror or quite possibly done all three, given the bad luck that’s followed him and his Hill End team this year.

There were signs that they might have been a mover in the MGFL this season, with the recruiting of some quality personnel adding some weight to their cause.

Injuries however can change a teams fortune in the blink of an eye, and none are more hurtful than that sustained by the coach and key forward.

An ACL is likely to keep santo on the sidelines for this year and he’s joined by some quality teammates confronted with the same or similar problems.

Unfortunately that spells disaster for the Rovers, even at home to Thorpdale.

The Blues themselves have had to contend with some long term injuries, but at this stage are managing it as best they can.

Where is it being played?: Newborugh Rec Reserve 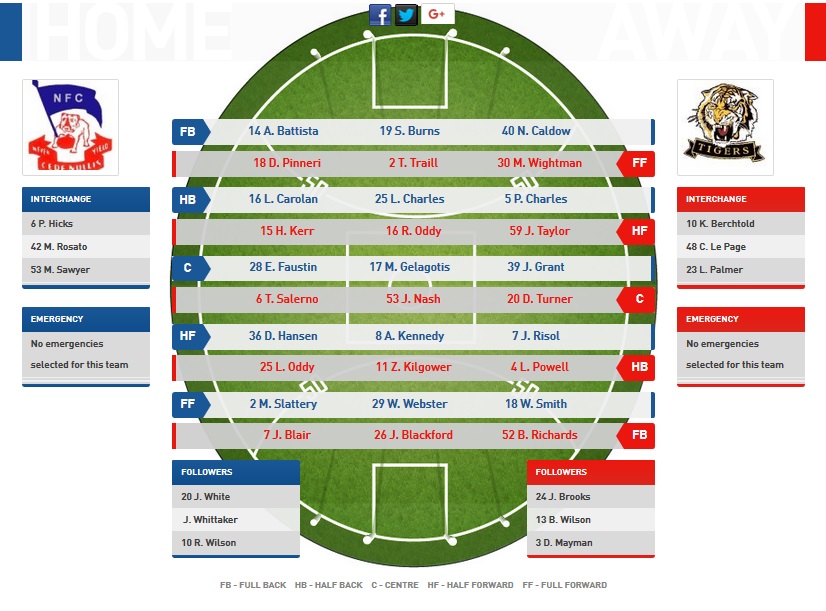 The Bulldogs, will have the chance to further test their change of game style this weekend against a Mirboo North side that is now well and truly on the move.

The Bulldogs, after defeats to top sides like Yallourn Yallourn North, Trafalgar and Yinnar in the weeks prior, have decided that “imitation is the sincerest form of flattery” when they take portions from each of the league leaders game styles and mould them into their own.

Although successful last week against Boolarra, it will be put to the sword when they take on the Tigers.

The reigning premiers have started to find form, with three wins in succession, and a building belief that they will be forcing their way into the top half of the ladder in the three weeks ahead.

Both sides will be fighting for the Ron Skinner memorial trophy this weekend, but it might be best to just pass it over to the Tigers right now, so good has been their recent form

The Bulldogs have a sprinkling of better than average players and a game style that will surely improve as we get deeper into the season, but it wont be good enough to stop the visitors from making it four in a row, and in doing do send a warning shot to the teams above that the Tigers are not only back, but the’re going for back to back! This is a danger game for Morwell East, fifth on the ladder but having lost their past two matches, the Hawks will fall back to the pack if it were to lose three in a row.

Yarragon will be no easy task either, having pushed the likes of Trafalgar and Yinnar to within ten points over the past few weeks.

The Panthers are only a couple of class players and a key forward from mixing it with the best sides and winning.

They are capable of grabbing the points in a match like this, even away from home, but if Morwell East bring their “a” game, it too can turn opposition sides on there head in a matter of minutes with their sweet ball movement all over the ground.

This match will be a turning point for both clubs, for the Hawks a win will have them thinking finals, a loss with have them fighting for their lives.

For the Panthers, a win will be just reward for consistent efforts in the weeks gone buy and a possible springboard to better things in the weeks ahead. 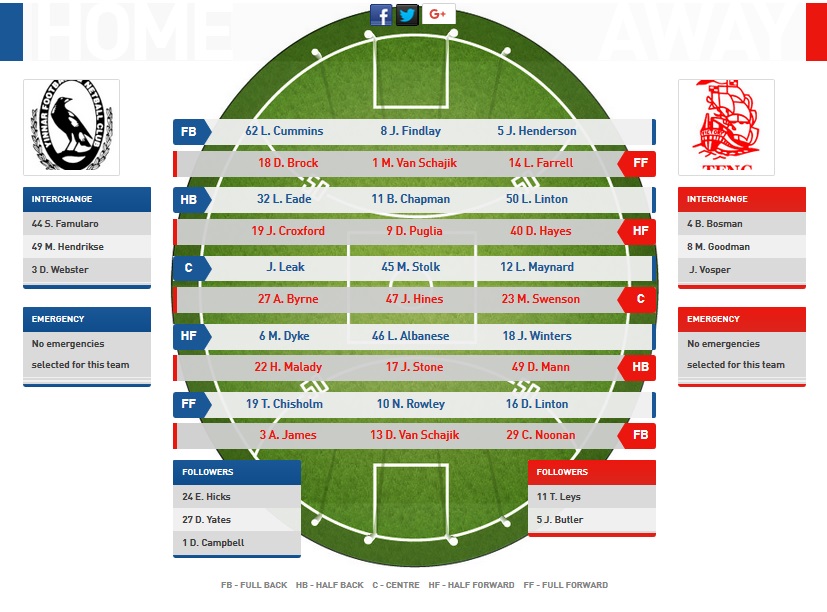 They say a week is a long time in football, but Trafalgar learnt that even sixty minutes, can change your fortune very quickly.

Unbeaten in their first six matches of 2018, the Bloods were locked away with scores a draw at the half way mark of their round seven clash against the in form Yallourn Yallourn North, before being blown away by the Bombers and losing their hold on top spot along the way.

This week the second placed Bloods take on third placed Yinnar, with only percentage separating the two, meaning another stumble will have them falling to third with further pressure coming from below.

Yinnar, have been dealt an unbelievable amount of injuries this season and only the clubs depth has had the Magpies winning games of football, but that will be even further tested this week, when one of their key players gets married in Melbourne with plenty of his team mates also on the invite list.

James Dowling will tie the knot on the weekend, but while he says “I do” his team mates will be saying “please don’t” to their Trafalgar opponents, who are likelt to make the most of a weakened Magpies outfit.

The honeymoon will just be beginning for Jim, but it will be a nightmare at Yinnar’s home ground, unless the boys can dig even deeper than they have already this season, to give the happy couple the gift of four points.