Here are the results, goal kickers and best players for Round 1 of the Mid Gippsland FL

With a haul of new recruits of their own, Yarragon had every right to feel a little bullish about their home ground chances against Newborough.

But it was the Bulldogs’ fresh talent that shone on Saturday, with debutants Billy Webster (Buln Buln) and Sean Burns (Moe) featuring on the best-on-ground list.

Michael Gelagotis’ five-goal haul was enough to earn him five votes while another pair of debutants in Jared Risol and Zac Regester both goaled in their first game for the Dogs.

Bulldogs coach Tom Hallinan was suitably impressed with his side’s first up efforts.

“There’s a good balance there and we were particularly pleased with those who are 19-and-under today,” Hallinan said.

“They really stuck to their task and I really challenged the group to ask ‘who is Newborough Football Club this year? What do you want to be? What do you stand for?’ And I think we really defined it and I really think our four-quarter effort defined it,” he said.

The Bloods piled on three goals and five behinds to leave Hill End scoreless and 23 points behind at the first break.

The 23-point margin blew out to 43 at half-time and the game appeared all but over.

Daniel Hayes and Rhys Holdsworth bagged three goals each for Trafalgar in the win while the day, Austin Byrne and Matt Van Schajk each nabbed two.

Morwell East have buried the early season hopes of Boolarra in the Mid Gippsland Football League in an indomitable first round performance to notch a mammoth 124-point win at Ronald Reserve, 23.17 (155) to 4.7 (31).

The Hawks came out of the blocks in fiery fashion to head into the first break with a 27-point buffer which widened to 48 at half-time.

Nicolaus Campbell was the toast of Morwell East and finished the day with a bag of eight goals while Lucas Towns kicked four.

The Hawks refused to take their foot off the Demons’ throat and turned into the final quarter with an enormous 91-point advantage.

Sam Marks put in a best-on-ground effort for Morwell East in the win and boon recruit Roberet Michaelides was also handy.

The Demons were well served under pressure by Matt Buglisi, Alex Devonshire and Luke Conway while Jesse Giardina kicked two on debut after coming across from Mirboo North.

The Blues dominated inside 50 with 29 scoring shots to the Bombers 16.

A two-goal lead at quarter-time quickly blew out to more than five goals at the major break.

Edward Green and Chris Redl kicked three each for the Blues in the win while Kane Saliba and Brad Atkinson were busy.

The Magpies put the rest of the Mid Gippsland Football League on notice with the 44-point victory and emerged hell bent on redemption with 11 new faces at the nest.

Mirboo North made the most of their chances early and drew first blood through Zac Kilgower.

Magpie Matt Dyke was proved a nuisance for Tigers playing-coach Josh Taylor and opened the door for successive goals from Brad McBride and Nathan Rowley.

Tim Trail, who finished the day with three goals, converted early in the second to narrow the margin to eight.

It was all downhill for the defending premier thereafter as Yinnar tied the ball up in trying and windy conditions through 2017 league best and fairest Michael Geary.

Tyler Chisolm converted and blew the lead out to over four goals at the main break.

A slew of undisciplined play from Mirboo North in the second-half gifted Yinnar three 50-metre penalties and goals and the upper hand on their way to the 44-point win. 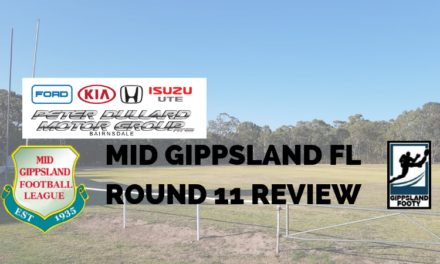 Mid Gippsland FL ladder and leading goal kickers after Round 3