Gippsland Power’s Under 18 boys cruised to a 44 point win over the Murray Bushrangers at Punt Road Oval on Sunday March 25th.

The Power held a 15 point lead at half time but the last quarter was where they sealed the win, kicking four goals to one. Gippsland’s inaccuracy may have cost them an even larger win, with nine behinds accompanying their four goals.

Josh Smith bagged 3 goals for the Power, while Matthew McGannon was named best.

Also in a curtain raiser, Gippsland Power’s Under 16 boys lost to Murray Bushrangers by 35 points.

In arguably the upset of the weekend, a primarily bottom-aged Gippsland Power side rolled the highly-rated Murray Bushrangers at the Swinburne Centre in Richmond. Undoubtedly talented, the Power had to fight for it early, trailing by a point at quarter time, before booting six goals to three in the second term to head into the main break with a 15-point advantage over their opponents. A tight three goals to two term saw Gippsland extend its lead to 20 points with a quarter to play, before running out the game with a four goals to one final term to win 15.14 (104) to 8.12 (60).

Big full-forward Josh Smith booted three goals and was among 10 individual goal kickers for the Power. Over-ager Matthew McGannon was crucial at half-back, having the ball on a string as he marked everything that came his way, providing some drive and run out of the back 50. Captain Xavier Duursma played his usual role through the midfield with much success, delivering the ball inside 50 with clean disposal. His work in close and ability to spread was good, rewarded with a goal. Bottom-agers Sam Flanders and Caleb Serong gave fans a glimpse into the future with some impressive ball-winning abilities, while Austin Hodge was strong in midfield as the 19 year-old moved forward to boot two goals for the Power. 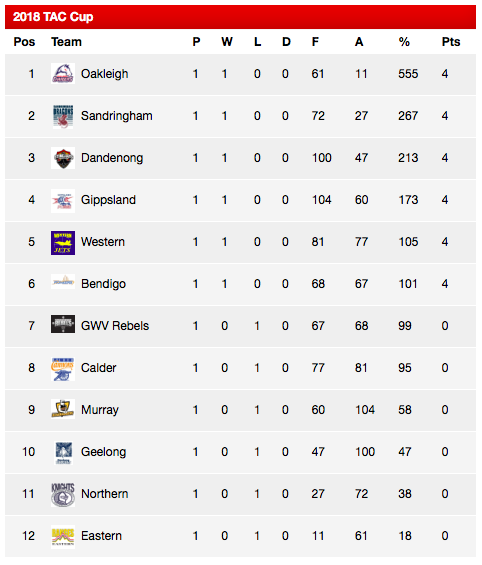 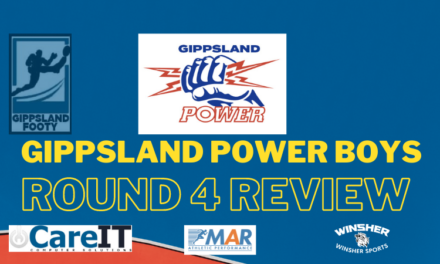