The unstoppable juggernaut that is Chris Dunne has once again risen for Leongatha to lead the defending premiers to victory over Drouin on the road in round seven, 18.12 (120) to 13.7 (85).

Dunne has emerged as a match-winner for the Parrots on more than one occasion so far in 2018 but his eight-goal haul on Saturday was his best yet.

The power forward has a firm grip on the league leading goalkicker mantle with 30 majors for the season to date at an average of 4.2 goals a game – seven clear of Sale’s Brad Dessent in second.

Leongatha coach Paul Carbis said Dunne’s role in the side was a “fairly important” one.

“Over the last few weeks, [Dunne’s] role has gotten easier because we’ve got a few big tall forwards in there, so he’s feeding off them and isn’t the main target,” Carbis said.

“He picks up the crumbs from them or picks up his own contested mark, which he did really well on the weekend.”

James Lloyd and Julian Lockwood have provided support for Dunne up forward and the former kicked four goals in round seven – all in the first quarter – to take his tally to 12 from just three games.

“He got us off to a flyer on Saturday so it’s good to have that key target, which is probably what we were missing against Maffra and Traralgon.”

Josh Schelling and Cade Maskell were again key for the Parrots down back and were helped by the return to form of Sean Westaway.

The Hawks came at the Parrots in the third term to stand just 12 points in the red at the last break.

“We expected [Drouin] to be competitive and they really served it up to us and we didn’t have our best day but that’s credit to the opposition,” Carbis said.

“Sometimes you’ve got to win ugly and it’s a lot better than losing ugly.”

IT took Maffra some time to shake off Warragul, but when the Eagles did, they were a class above.

With scores level in time-on of the first quarter, Maffra kicked 23 of the next 30 goals to win by 99 points.

Dan O’Brien and Kel Porter got the Eagles going in the midfield, linking with Winston Gieschen off half-back.

Attempting to win their first match at Maffra since 1997, the Gulls looked to press the Eagles to slow down the home side’s running game. It worked in the first quarter, but hampered the Gulls’ ability to apply early scoreboard pressure.

The Eagles had more of the ball, but in coach Wayne Butcher’s words at quarter-time, didn’t “own the corridor”.

They moved the ball to the wing, but didn’t look to centre it to set-up an attack. Taking the long way to get around the Warragul press, Maffra’s efforts were eventually rewarded when Porter set-up Renooy’s opening goal.

The Gulls were back on level terms after goals from Luke Di Ciero and Nate Paredes, the latter coming after Paredes’ roving effort and his kick from the boundary took a kind bounce.

Goals from Hudson Holmes and Bennett gave the Eagles a 13-point lead at quarter-time.

Ty Morrow’s goal in the fifth minute of the second term cut the margin to six points, before Bennett, Brunt and Bedggood booted goals for the Eagles.

Warragul’s tactics left some Maffra players frustrated at times, with Fowler kicking goal for the visitors from a 50 metre penalty, but Bedggood kicked the final two goals of the quarter to give the Eagles a 31-point lead at the main break.

After receiving a knock during the second term, Danny Butcher didn’t return to the park for the second half, but the Eagles took control of the match on the scoreboard.

The Eagles kicked five goals to one during third quarter, including two each from Renooy and Brunt, to lead by 54 points. The goals kept coming in the final term, with Maffra kicking nine majors and Warragul four.

Fowler and Di Ciero finished with three goals each for the Gulls, while Jake Hughes played well across half-back and Kim Drew on the ball.

The Maroons held the hosts goalless in the first term and were helped in the second by inaccuracy on goal, with the Lions recording three goals from 10 scoring shots.

Traralgon had a slender lead of three points at the final break but found legs when it mattered most to storm home to record an impressive 29-point victory.

The win helps Traralgon move into fifth place on the ladder, just behind Moe on percentage, with four wins and three losses.

The Maroons return home to host in-form Maffra this weekend in round eight and Moe will host Wonthaggi.

SALE recorded its sixth consecutive win, defeating Bairnsdale 16.9 (105) to 10.13 (73) in round seven of Gippsland League football.

The conditions at Sale Oval on Saturday led to a great start for  both teams, as the ball freely moved from end to end. Both teams struggled to put any real defensive pressure on the other due to the ball movement.

Sale were controlling the play by foot, looking to penetrate the Bairnsdale gaps, and despite leading by 10 points at the break, the style of play wasn’t what coach Shane Fyfe was looking for and he urged the players to take more risks.

Sale played its best football in the second quarter, with strong pressure through the forward half exemplified by a big fair hit in the contest on Russell Cowan by Brad Dessent.

As the pressure stepped up, the goals began to flow, quick smart ball movement out of the Bairnsdale forward half by Jayden Allison and then Ben Jones to Fyfe, who got on the end of a rare opportunity to kick a goal.

It seemed the game would blow out as Sale kicked six goals to one and opened up a 39-point lead at half-time.

Bairnsdale made some adjustments at half-time and its style of play meant it had the ability to kick goals quickly. The Redlegs tried to limit Jordan Dessent’s influence on the game, and began to read Jack Lipman’s hit-outs more effectively.

Sale didn’t kick a goal as skill errors hurt forward of the centre.

Bairnsdale pushed hard and kicked four goals to none to bring the lead back to 18 points at three-quarter-time.

A free kick and subsequent 50 metre penalty gave McLindin the chance to kick his third early in the final term. It was the goal Sale desperately needed and broke the shackles, as it kicked the next two to effectively put any chance of a Bairnsdale comeback to bed.

The game still had plenty of feeling as Bairnsdale continued to push hard, but Sale held reasonably strong as wayward kicking and good defensive structures meant the shots were from wide and far.

Kicking five goals to two, the Magpies did enough to run out 32-point victors, and secure second position, a game clear of Leongatha on the ladder.

Lipman took advantage of Bairnsdale’s weakness in the ruck, his hit outs and ability to mark strongly around the ground were noted and he was clearly best-on-ground.

The Sale midfielders, trying to cover the injury sustained to captain Kane Martin, all played good football in patches, but it was Adam Wallace who was very consistent, and Jordan Dessent, who also kicked two goals, continued his great form.

Zac Hurley created well out of the backline and showed his ability to play on small and tall players, while Andrew Quirk limited any influence his opponents had with great defensive work.

Jack Mapleson continues to improve after injury last year, his ability to be strong in the contest and smooth outside saw him kick three goals.

While coach Fyfe will be happy with the amount of goalkickers, patches of really good play and win, the work and tactics by Bairnsdale saw Sale put in a slightly inconsistent performance.

The coach and playing group will realise it needs to play more consistent football to be a top finals contender, as the next three matches are big tasks, Warragul away, Leongatha at home and Maffra away.

The Tigers burst out of the blocks in the opener and set themselves up with a three-goal-to-one first term to lead by 14 points at the first break.

They weren't short of opportunities to kick away in the second quarter but kept Wonthaggi on a tight leash with two goals and four behinds to earn a 15-point buffer at half-time.

The advantage ballooned to 19 at the last break and a six-goal final quarter helped the Tigers over the line for their first points on the season. 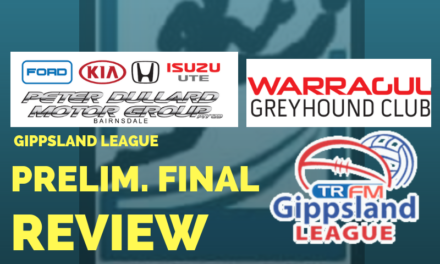