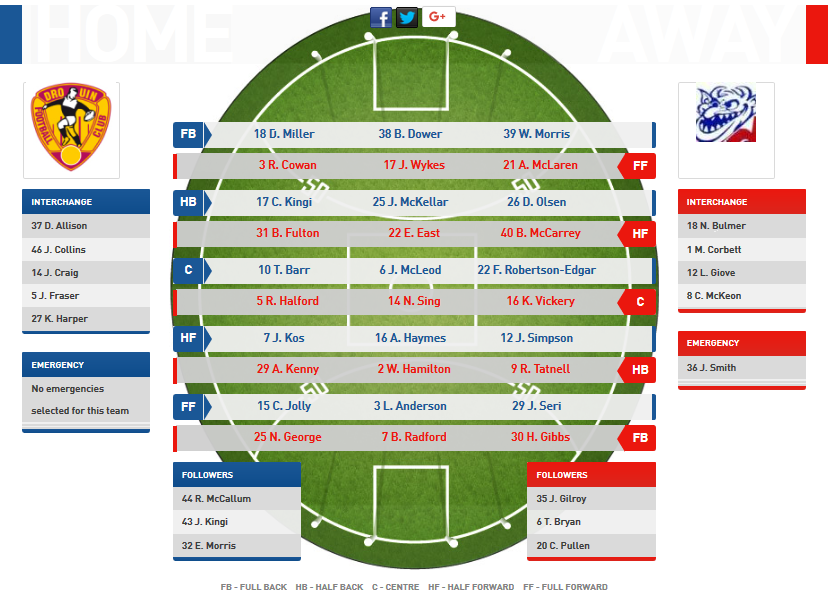 Both Drouin and Bairnsdale were dealt sizeable blows at the weekend and go head-to-head for some much-needed premiership points at Drouin Recreation Reserve this weekend.

It was always going to be an insurmountable task for the Hawks against heavyweights Maffra and three goals was all they could manage on their way to a 65-point loss, while the Redlegs came up against a determined Morwell side and were outdone by 74 points.

The last time the sides met in round three earlier this season the Hawks were in the game until quarter-time but were blown out of the water thereafter.

Russell Cowan scored five majors for Bairnsdale on their way to an 87-point win and Brayden McCarrey and Josh Kiss each kicked four. 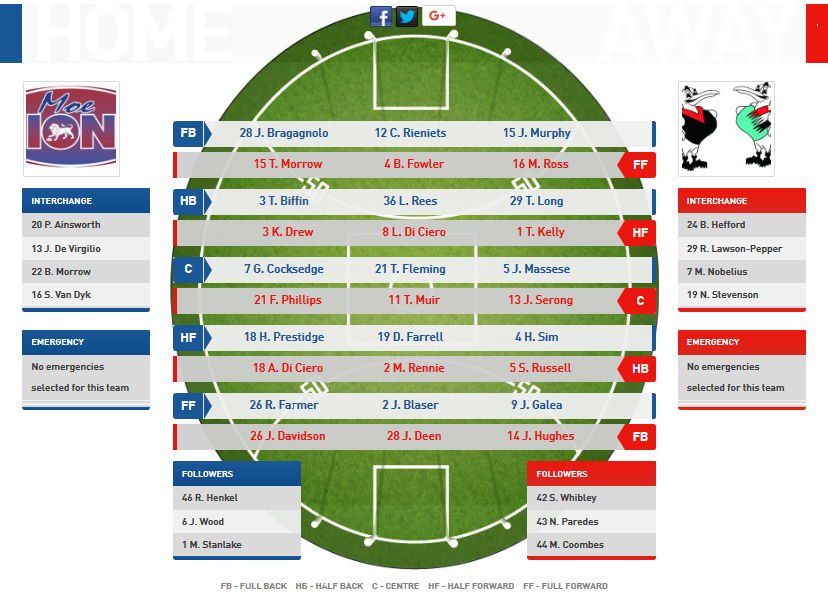 Moe claimed the scalp of the week in round 11 on Saturday – a two-point win over an in-form Sale side enough to help the Lions secure fourth spot on the ladder and favouritism heading into this weekend’s clash with Warragul.

The Gulls enjoyed a handy 50-point victory of their own at the weekend and Moe coach James Blaser was prepared for a “red hot” meeting in round 12.

“Warragul had a good win on Saturday and we always have solid hit outs with them,” Blaser said.

The Lions were too strong in the earlier round two clash and cruised to a nine-goal win, but Blaser maintained Warragul were a different kettle of fish this time around.

“When we got them earlier they had five key players out so we’ll have to play some good footy to beat them this time,” he said.

“The bonus is it’s a home game [for us], but they’re playing for their season and they’ve got to win six or seven in the last seven weeks to really push for finals, so we’re not going into it lightly and expect them to be red hot.”

Blaser said the Lions had “a few sore bodies” heading into round 12 but would welcome back Josh Pearce for Saturday’s game against Warragul. 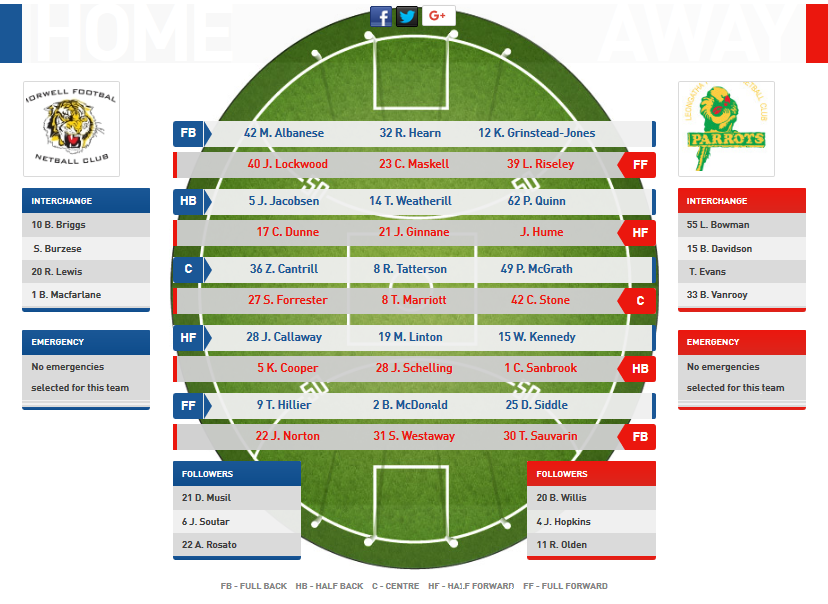 Leongatha coach Paul Carbis has flagged “consistency in performance” as key for the defending premiers ahead of their round 12 meeting with Morwell this weekend.

The Parrots – sitting in second spot on the Gippsland League senior ladder – made away with the points against Traralgon with relative ease at the weekend.

The 37-point win was enough to give them a game’s breathing room after Sale fell to a rampant Moe side, but Carbis was reticent about the Parrots’ prospects this weekend.

“You’re up against a good team and then come up against the lower team but you’ve still got to try and get up for it and not take it easy,” he said.

“For me, it’s about us and repeating those consistencies and performances – you’ve got to come in with the right attitude.

“Morwell had a really good result on the weekend and they’re a different side at home.”

The Parrots cantered to a win in round three this season – stacking on 19 goals to Morwell’s four to run out 95-point victors.

However, the Tigers played like a team possessed in round 11 and dealt Bairnsdale a 12-goal drubbing in a welcome return to form ahead of their clash with the reigning premiers.

Prolific scorer Chris Dunne will return for the Parrots this weekend after being named in the team of the decade for the NT Thunder – as will Brock Davidson – while Julian Lockwood is still a while off with a broken thumb. 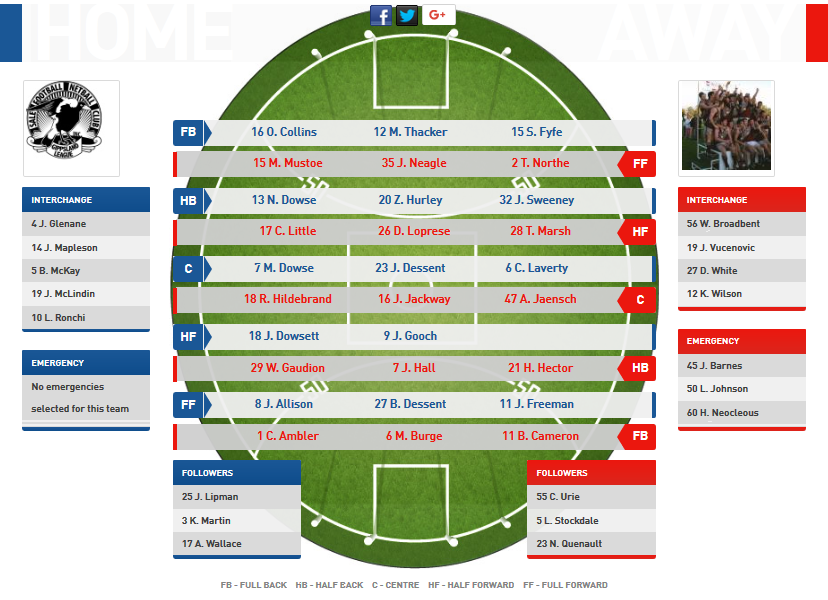 Sale were dealt a blow at the weekend when they went down to Moe by two points and will be looking to return to the winner’s list when they host Traralgon this weekend.

The Maroons were faced with a tall task of their own and couldn’t match it with defending premiers Leongatha in a 37-point loss.

The Magpies are in a position of luxury in third with a game between them and the Lions but another misstep against Traralgon this weekend could see them slip to fourth.

Traralgon, in fifth, have the complete faith of coach Mark Collison and with good reason.

They toppled Leongatha in their round two encounter and have scalped Moe, came within 11 points of Maffra and 22 when they last played the Magpies in round three. 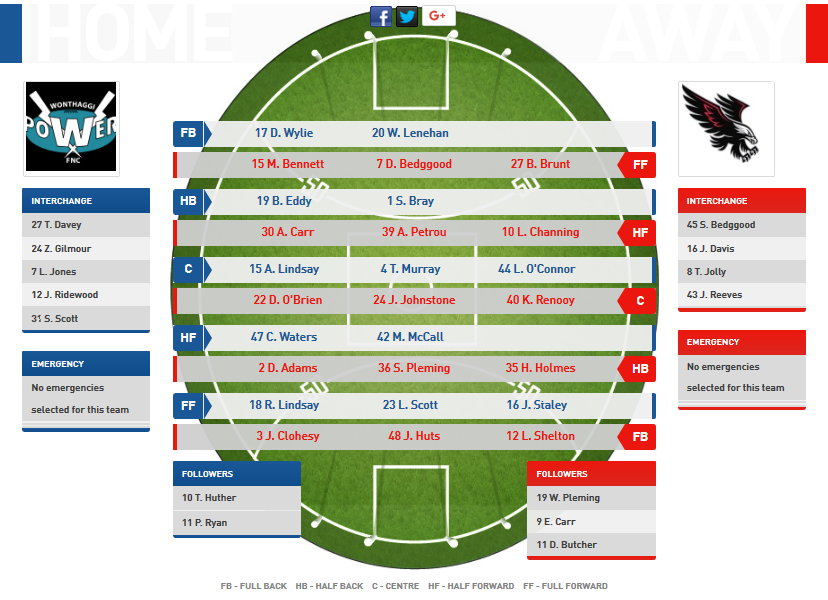 A decided mismatch is brewing between ninth-placed Wonthaggi and ladder leaders Maffra in round 12 and the Power will be well and truly up against the odds this weekend.

The Eagles flexed their muscle in round three and stacked on 24 goals on their way to a 136-point demolition of Wonthaggi.

They have since dropped just one game to Sale in round 10 in an otherwise complete season.

For the Power, finals are beyond reach but a showing against the Eagles this weekend could restore some hope for the remainder of the season.