The Maroons have won four of their last five and the only mark against their name in that stretch game was an 11-point loss against Maffra in round eight.

“Against Maffra I thought we were the better side for three quarters,” Traralgon coach Mark Collison said.

Collison’s faith in his side, which is made up of proven performers and promising young talent, has harvested a healthy confidence among the playing group ahead of this weekend’s round 11 clash with Leongatha.

The Maroons won the earlier round two encounter with the Parrots by 31 points and have reason to believe another win is well within the realm of possibility.

“Leongatha have plenty of strengths but also weaknesses, and we exposed that well in round two so I’m confident in our ability to do that again and put up a good fight,” Collison said.

“But in my eyes, they are a top-two side.

“For me, if you let them have the ball on the outside you’re in trouble. You’ve got to keep the footy on your terms.”

The emergence of Connor Little as a key fixture down back and the return to form of North Gippsland recruit Jesse Jackway and Jacob Vucenovic have been big for Traralgon.

“We’re getting a lot of players coming back now so the depth is really good. Our reserves players have been holding their own [in the seniors] which is also a really good thing,” Collison said. A mismatch is brewing between Maffra and Drouin this weekend when the Hawks will be forced to travel to the Eagles’ nest in search of an unlikely win.

Maffra, first, and Drouin, last, have been on vastly contrasting paths to the half-way point of the season with the Eagles nine from 10 and the Hawks with a solitary win on the board.

But with the exception of their round 10 loss to Moe, Drouin have not been embarrassed in the slightest.

They lost to Traralgon by 12 points in round six and came within six goals of Leongatha the following week.

The Hawks came agonisingly close to topping Morwell in round eight and were pipped by eight points and went down to Wonthaggi by just 12 points in round nine.

Maffra, on the other hand, enjoyed a dominant and seamless run to round 10 when Sale delivered their first loss of 2018. 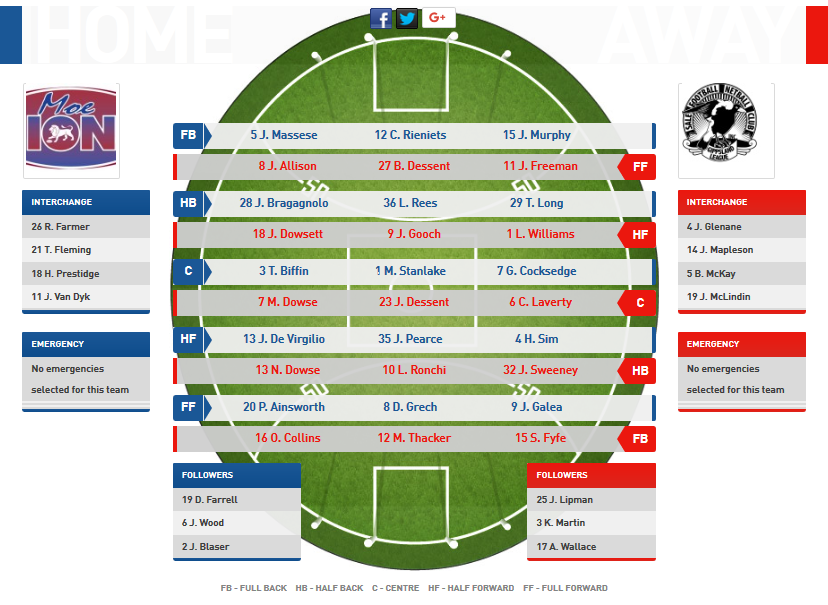 Sale coach Shane Fyfe said he “really rate[s] Moe” and was wary of the Lions’ multiple avenues to goal ahead of the two sides’ round 11 clash on Saturday.

“The biggest thing we’ll have to watch is their multiple goal kickers which means they’ve got a lot of [players] rotating from half-back through to mid and forward,” Fyfe said.

“Moe at Moe are really tough, and I think the competition is so even you’ve got to be prepared on the day and hope we can get the job done.”

Heading into the second half of the year, Fyfe said maintaining a fully-fit list was a careful balancing act.

“We’re coming into that grind in the middle of the season where we’ve got to train but also keep ourselves fresh,” he said.

Sale did what all before them have failed to do in round 10 when they slayed league leaders Maffra and the weight of the achievement was not lost on Moe coach James Blaser.

“We’re really looking forward to playing Sale. They’re a good side and had a good win over Maffra,” Blaser said.

“They’re really strong, so we’re looking forward to the challenge. Playing them at home … they’re the sort of games you want to play and look forward to.

“We’re in reasonable form and have a healthy list so it should be a good game.”

Blaser highlighted the Magpies’ “strong” midfield and “strong, marking forwards” as potential sources of danger – ones the side would “be looking to shut down” on Saturday.

Sale have the upper hand heading into round 11 and made away with the points after a 38-point win over the Lions in round two earlier this season.

Bairnsdale and Morwell were both on the receiving end of losses in round 10 and will look to return to the winner’s list this weekend.

The Redlegs were on the receiving end of a veritable drubbing at the hands of an in-form Traralgon side and were belted to the tune of 79 points.

They have some breathing room, however, and sit in sixth spot on the Gippsland League ladder, two games clear of the Tigers in eighth.

The Redlegs have won just one of their last five but the four losses have come to arguably the best four sides in the competition in Traralgon, Leongatha, Sale and Maffra. Warragul can move three games clear on the senior ladder this weekend with a win over Wonthaggi in round 11.

The Gulls sit in seventh with four wins and while Wonthaggi are in ninth with two.

The Power have won just one of their last five matches, against cellar-dweller Drouin in round nine, but fell to an in-form Sale side by just 19 points in round six.

For the Gulls, their win over Morwell at the weekend was their first in five weeks, but they have proven their capacity to match it with the best and came agonisingly close to upsetting Sale in round eight before being toppled by a single point.

Warragul got the better of Wonthaggi in round two and won by 19 points. 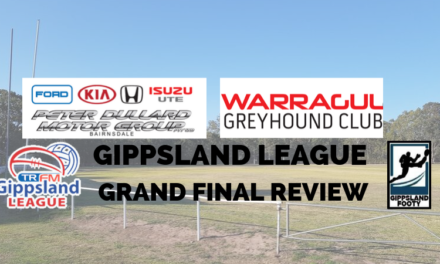