Catani, led by the usual suspects of Paul Pattison and Owen Fitzpatrick (six goals), got over the line against Buln Buln in a tight contest on Saturday.

Catani certainly didn’t have it all its own way with Carlton Helliwell, James Fowler and Ryan Bishop (two goals) battling hard for Buln Buln as they fought back in the second half.

With Pattison, Nic Visser and Dale Johnson doing the bulk of the work up the ground, Fitzpatrick was on song in the forward fifty as he converted when Catani needed him most.

Ellinbank maintained control over Lang Lang from start to finish, but would be left to lament missed opportunities in the final term.

The Eagles kicked four goals to one in the first term and were never headed, working to a comfortable 49-point lead at the final change.

The home side missed an opportunity to add to the percentage, managing just four behinds in the final term while the Tigers scored two consolation goals to out some respectability back into the scoreboard.

Matt Barrand and Shaun Phelan combined for seven goals between them, while Franc D’Agostino gave first use in the ruck Ashley Wallace, Jake Harper, Brett Masterson and Tom Mashado were also key players in helping the Eagles take control.

Longwarry were far too good for Neerim-Neenm South, setting up an enticing contest against the ladder leaders next week.

The Crows had some accuracy problems early, with a return of 2-7 keeping the Cats in the contest at quarter time.

Three goals to one set up a 19-point buffer at the long break and while the Cats remained in touch, the third term put paid to any hopes they may have had.

NYORA was up against the perennial benchmark team of the Ellinbank and District competition, Warragul Industrials at Nyora on Saturday and they passed the test with flying colours.

While the Saints failed to score a goal in a tightly contested Opening term, they were giving plenty at the contest and around the ground and by early in the second quarter they had the game substantially on their own terms. Dusties got the first goal of the match within seconds of the opening bounce and Aiden Cumberland might have responded minutes later but missed an easy one leaving both teams to engage in an arm wrestle to the first break, dominated by the defences. llan Osman was having a good contest with the Dusties' full back Russell Ware while the team’s onballers were getting back to assist Fia Tootoo and his fellow defenders in the back half.

Dylan Heylen, Ben Miller, Jesse Heylen and Ben Hallas were in the early play but it was Dusties that should have had a couple more goals through Jolly and King who both missed easy ones. But the signs had been good from Nyora and Ben Schultz got the scoreboard ticking with two early goals in the second term. Nyora was swinging a number of players onto the ball with the likes of Carrigy, Spooner, Dylan Heylen and Bancroft starting to get the edge over Bale, O’Brien, Brewster and big Coutts in the ruck.

Ilan Osman got into the action, playing on to kick a goal and when Schultz run in for another halfway through the quarter, the Saints had established an important lead in a tightly contested match. Nick Carrigy was enjoying the support he was receiving at the stoppages and with plenty of players looking to join in including the likes of Kallon Rigby, who took a ‘classic catch’ on the wing, Hallas, Provan, Burns, Dixon and Miller; there was good attack on the ball and plenty of options once the ball broke free.

A fine passage of play, started in defence by Miller and Dixon ended up in a goal late for the term and Nyora was doing all the attacking. Dusties closed the gap to three points by three quarter time but in an absorbing run to the line, Nyora scored three goals to two in the last quarter to win the day and stay on top of the ladder.

Best player for Dusties was Michael Ablett who played his 100th senior game for the club on Saturday. He has already played a ton of games for Drouin as well.

POOWONG won its first match of the season against Nilma Darnum on a dramatic day.

In the reserves game the Nilma-Darnum club umpire collapsed but with the great effort of the trainers and a nurse, and the club having a defibrillator available, the umpire was in good hands. Luckily the ambulance was nearby coming for a netball injury and they handled the situation until further ambulances and MICA support arrived to prepare the patient to be airlifted to Melbourne.

“It was a credit to everyone involved from the two clubs how the situation was handled ' and the service and dedication of ambulance crews that were at the scene,” Poowong’s Geoff Wyatt said, “Ambulances were also required for two incidents on the netball courts and we thank everyone who assisted here also. News is that the outcome is positive and we wish him and his family all the best in the recovery period. Hopefully the two netballers injured on Saturday, an ankle and knee, make a quick recovery being valued players with the club,” Geoff said.

With a breeze blowing to the Drouin Road end, Poowong was hoping to break the ice but with Ben Hancock, Trevor Hooker, Chris Doria and Josh Harvey "all unavailable it was not going to be easy. The senior game started at 3.15 with clubs agreeing to have no time on and shorter breaks and the lights be on to ensure the game was played.

Poowong kicked with the breeze to the Drouin Road end but it was Nilma-Darnum that kicked the first goal rolling through. Poowong fought back with a good kick from outside 50 metres by James Doria, one of his three goals. A good pass to Chris Robinson added Poowong’s second goal.

Nilma kicked a goal at the start of the second quarter to take back the lead but Tom Wyatt responded for the hosts. James Doria kicked his second for Poowong, followed by a Nilma goal, but just before half time a great tackle by Poowong’s Michael Harris resulted in a goal and an 11-point lead.

After the break Poowong worked hard and a pass to Jake Hazendonk resulted in a goal followed by James Doria’s third. The lead was out to 28 points at the last change and it could have been more.

The last quarter was end to end early but with 10 minutes to go Nilma kicked three quick goals with the breeze and it was back to eight points. Play was desperate by both sides but a clearance from Nilma’s forward line led to Poowong kicking a goal through Josh Chiavaroli running hard down the ground. Poowong were 14 points in front as the siren sounded and their first win of the season. Poowong supporters were jubilant and filled the rooms after the game. This win is perhaps the one the club needed to kick start the season. Poowong's forward line was more active than in past games and with the increase in runners especially Josh Chiavaroli this opened up the game and they looked a lot better side. 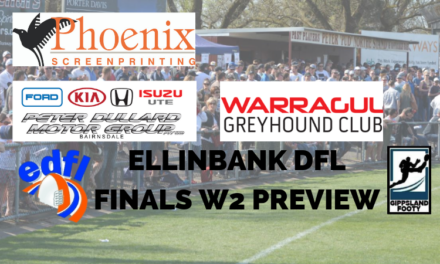