With wintery conditions playing havoc across the league, it was difficult to get a read on how many teams are shaping up. It was the second consecutive week that the young Lyrebirds team put in a brave effort, but a return of 1-7 in the final term saw an opportunity wasted to steal four points from a fancied opponent.

Leading by nine points at the final change, the Saints could have been further ahead given their return of 2-13.

A return of nine behinds to half time allowed the Lyrebirds to remain in the contest, leading by just one point at half time.

The Lyrebirds created opportunities in the final term but couldn’t capitalise, falling short to the tune of three points.

Key players returning to the side helped the Lyrebirds cause, including Charlie Park who finished among the better players.

With Trent Baker still to return to the side, the Lyrebirds will be hopeful of being competitive against the top sides.

The Saints have comfortably accounted for a struggling Neerim-Neerim South and fallen in against a determined young Buln Buln side. A date with reigning premier Catani next week should give a better indication of where the Saints are at.

At Lang Lang, it was the Tigers who came out on top over Neerim Neerim South.

After an even first quarter, the Tigers scored two goals and held the Cats Scoreless to take a 16-point lead into half-time.

Neerim Neerim South scored two goals in the third quarter as Jackson Ward and Nathan Bayne get going, but they were matched by Lang Lang’s Stu Casey, Brad Michie and Danyon Blew as they helped Lang Lang score two 1 goals in the quarter also.

In a wasteful final term, Lang Lang kicked one goal and four behinds, but it mattered little as they held Neerim Neerim South scoreless, running out 6.11 (47) to 3.6 (24) winners.

Much like its first round match against Longwarry, the Bombers were able to hold a narrow lead in the first half.

Much talk around the grounds at half time was around the possibility the Bombers may be a threat under new coach Matt Shorey. Unfortunately for the Bombers the verdict on that is still out.

Unable to maintain the same effort that delivered the result against another early season fancy in the Crows; it saw the Eagles kick away with five goals in the third term to set up a 26-point lead that would prove unassailable given the conditions.

The Bombers won the final term, kicking two goals to one as the match petered out. Matthew Barrand and Mathew Robertson helped get the Eagles going, kicking five goals between them.

Michael Urie made a welcome return to form, while recruit Francis D’Agostino gave first use in the ruck Coach Ben Wragg and captain Mark Vassett led the way, while Thomas Robertson was also prominent.

Goal scorers and better players for Nilma-Damum were not available at time of going to print.

Catani made it two wins from two to begin the season, taking care of a spirited Poowong team.
A 16-point lead for Catani at half time was the product of the Blues taking advantage of their chances, and the play of Jackson Caddy and James Alexander proved pivotal.
In a tight second half, both teams managed two goals each as Catani claimed the 8.6 (54) to 5.7 (37) win. Owen Fitzpatrick proved to the difference, kicking four majors.
Hayley Wildes

The performance of Nick Redley was massive for the Crows as he battled through a severe ankle injury to help steer his team home.

"He came back on and had a real influence on the game," Fry said.

"They were rolling three ruckmen through him, or at least two of them, and he saw off all challenges which was really good." 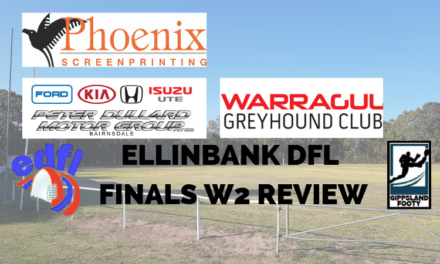 Ellinbank DFL ladder and leading goal kickers after Round 7