The Bombers took the lead in the second quarter, but were held to just a single point in the third.

Indicating a considerable headwind, Lindenow was then score-less in the fourth as Boisdale-Briag romped home, kicking four goals straight to win.

Jeremy Reid was the stand-out, with three goals, and captain Shaun Bates was named best.

Wy Yung kept in touch with the top 2 teams, accounting for Orbost Snowy-Rovers easily by 90 points.

The Tigers jumped out to a 19 point lead at quarter time, keeping the home side to a solitary behind for the opening term.

They then continued to pile on the pain for OSR, increasing their lead at every change.

For Orbost Snowy-Rovers, Jarrah Nettleton kicked 2, while Hamish Nettleton, who was named their best on the day, also kicked 1.

Paynesville's third highest score for the season was not near close enough to match a classy Lakes Entrance outfit, with the latter comprehensive winners by 101 points.

The battle of the Gulls saw the home side jumped early, with Lakes slotting through 7 majors to 1 by quarter time.

Paynesville fought hard to recoup the deficit in the second term, reducing the margin to 33 points by half time, but the damage had already been done.

The second half saw Lakes kick 12 goals to 3 to secure second spot on the ladder, only sitting behind Stratford on percentage.

It leaves Paynesville still searching for that elusive third win of the season, who have only beaten Orbost-Snowy Rovers twice so far.

Lakes Entrance had a good spread of goal kickers, with James Gibbs and Gary Puruntatameri both kicking 4 goals each. Alex Saunders was named best-on-ground, who also kicked 3 goals.

For Paynesville, Jack Haslam kicked 3 goals, while Lachlan Willmott was named their best on the day.

STRATFORD managed to demolish Lucknow in appalling conditions during East Gippsland football’s round 12.

There were notable dead zones on the ground, with players scrapping through the mud to gain possession.

A chilly wind and plenty of rain kept things reasonably unpredictable, but Stratford adapted well and threw players at the ball — the quarter-time score was 1.4 (10) to 1, and it was hard going for both teams from there.

Adding to the unpredictability, the electronic scoreboard was knocked out for most of the match, until the netball court’s was dragged out.

Haydn Erfurth led the goal kickers with five, his teammates able to find him from any angle, and ruckman Lachie Heywood was named best-on-ground ahead of midfield Lewis Bolton and the hardworking Nathan Pollard, who made the most of the centre clearances.

Aidan Jewell was best for Lucknow. 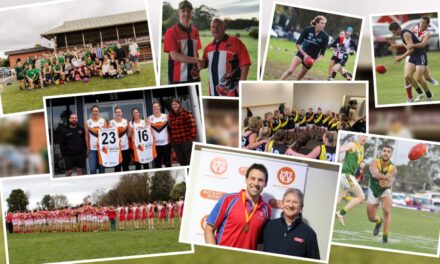